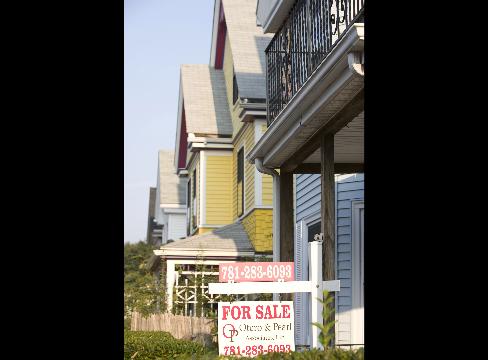 Sept. 30 (Bloomberg) — House prices in 20 U.S. cities declined in July at the fastest pace on record, signaling the worst housing recession in a generation had yet to trough even before this month’s credit crisis.

The S&P/Case-Shiller home-price index dropped 16.3 percent from a year earlier, more than forecast, after a 15.9 percent decline in June. The gauge has fallen every month since January 2007, and year-over-year records began in 2001.

The housing slump is at the center of the meltdown in financial markets as declining demand pushes down property values and causes foreclosures to mount. Banks will probably stiffen lending rules even more in coming months to limit losses, indicating residential real estate will keep contracting and consumer spending will continue to falter.

“The fact that house prices quickened their slide before the worst point in credit markets hit this month does not bode well,” said Derek Holt, an economist at Scotia Capital Inc. in Toronto.

Home prices decreased 0.9 percent in July from the prior month after declining 0.5 percent in June, the report showed. The figures aren’t adjusted for seasonal effects so economists prefer to focus on year-over-year changes instead of month-to-month.

Economists forecast the 20-city index would fall 16 percent from a year earlier, according to the median of 23 estimates in a Bloomberg News survey. Projections ranged from declines of 14.5 percent to 16.5 percent.

Compared with a year earlier, all 20 areas showed a decrease in prices in July, led by a 30 percent drop in Las Vegas and a 29 percent decline in Phoenix.

“While some cities did show some marginal improvement over last month’s data, there is still very little evidence of any particular region experiencing an absolute turnaround,” David Blitzer, chairman of the index committee at S&P, said in a statement.

Sales of previously owned homes fell 2.2 percent in August from the prior month and were 32 percent below their historic high reached in September 2005. Declining home construction has subtracted from growth since the first quarter of 2006, pushing the economy to the brink of a downturn.

U.S. homebuilders, buffeted by at least $19 billion in losses since 2006, will ask lawmakers to pass a $15,000 tax credit for all homebuyers, replacing a $7,500 incentive enacted earlier this year that they contend failed to stimulate demand.

“Our members are really hurting,” Jerry Howard, the chief executive officer of the National Association of Home Builders, said in an interview yesterday. “The tax credit passed in July seems to have failed to have sparked interest.”

To contact the reporter on this story: Bob Willis in Washington at bwillis@bloomberg.net