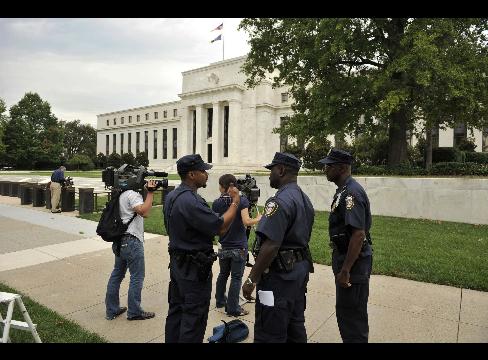 Sept. 29 (Bloomberg) — The Federal Reserve will pump an additional $630 billion into the global financial system, flooding banks with cash to alleviate the worst banking crisis since the Great Depression.

The Fed increased its existing currency swaps with foreign central banks to $620 billion from $290 billion to make more dollars available worldwide. The Term Auction Facility, the Fed’s emergency loan program, will expand to $450 billion from $150 billion. The European Central Bank, the Bank of England and the Bank of Japan are among the participating authorities.

The Fed’s expansion of liquidity, the biggest since credit markets seized up last year, comes as Congress prepares to vote on a $700 billion bailout for the financial industry. The crisis is reverberating through the global economy, forcing European governments to rescue four banks over the past two days alone.

“Today’s blast of term liquidity will settle the funding markets down, and allow trust to slowly be restored between borrowers and lenders,” said Chris Rupkey, chief financial economist at Bank of Tokyo-Mitsubishi UFJ Ltd. in New York. On the other hand, “the Fed’s balance sheet is about to explode.”

Banks and brokers have slowed lending as they struggle to restore their capital after $554 billion in credit losses and writedowns since the mortgage crisis began a year ago. The bankruptcy of Lehman Brothers Holdings Inc. also sparked fears among banks they wouldn’t be repaid by counterparties, driving up the cost of short-term loans between banks.

“These steps are being undertaken to mitigate pressures evident in the term funding markets both in the United States and abroad,” the Fed said in a statement released on the Board of Governors website.

“By committing to provide a very large quantity of term funding, the Federal Reserve actions should reassure financial market participants that financing will be available against good collateral, lessening concerns about funding and rollover risk,” the central bank said.