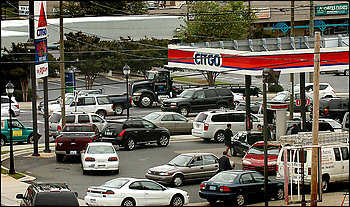 Terrance Bragg, a chef in Charlotte, made it to work only because his grandfather drove from a town an hour away with a 5-gallon plastic container of fuel for him. Three of his co-workers called and said they couldn’t make it.

“I drove past nine or ten gasoline stations that were out of gas,” Bragg said. “I had my GPS up looking for any gas in the area, from the mom-and-pop places to the corporate gas stations. Nothing. They were all taped off.”

Liz Clasen-Kelly, associate director of a homeless assistance center in Charlotte, took the bus to work yesterday. On Wednesday night, she and her husband checked five stations that had no gas, passed a long line backed up onto the interstate highway and chose not to wait at an open gas station with 50 to 60 cars still lined up after 11 p.m.

“If we had waited in that line, our car wouldn’t have made it,” she said, adding that the gauge was pointing to empty. The bus yesterday took her 45 minutes longer than usual. “It makes you realize how addicted you are to convenience,” she said.

In Atlanta, Jonathan Tyson, a Douglasville, Ga., resident who works for a company that does training for auto and RV franchise dealerships, ran out of fuel while waiting an hour in a line about 60 cars long to fill up his Land Rover. A man from the car behind helped push Tyson’s vehicle down the road.

“It was crazy,” Tyson said. “People were standing on side of road with gas cans saying they’d pay the person to run a [credit] card through just to get gas so they didn’t run out before they got up to the pump themselves.”

The city government, which uses 10,000 gallons a day, barred the public from two stations to make sure it could keep municipal vehicles running. On Wednesday night with his fuel gauge at empty, Al T. Nottage, a senior communications specialist in the Atlanta mayor’s office, looked for fuel at six stations, all closed, then called AAA and said he had run out of gasoline. It brought him two gallons, enough to get to work yesterday.

AAA spokesman John Townsend said that Colonial Pipeline, a leading supplier in the region, and the smaller Plantation Pipeline, which belongs to Kinder Morgan, were functioning below capacity because of lingering refinery problems along the Gulf coast. A spokesman for Colonial, whose Web site displays a news release from Sept. 10 before Hurricane Ike hit, did not return calls for comment.

The Energy Department said that as of Wednesday 63 percent, or 800,000 barrels a day, of production in the Gulf of Mexico was still shut down as were five refineries with a combined capacity of 1.2 million barrels a day. The refineries produce a half-million barrels of gasoline a day, or about 5 percent of the nation’s total supplies. Other refineries are still working at less than full capacity. Hurricane Gustav landed Sept. 1, and Ike hit Sept. 13.

“The production loss is similar to what was lost after Hurricanes Rita and Katrina,” said Anne Peebles, a Shell Oil spokeswoman. “This time the physical damage [to oil facilities] was not as great, but the down time with the storms hitting back to back is similar.” She said that “more fuel is coming” as facilities gradually ramp up again, but “we do think that production availability will normalize in the next several weeks.”

Townsend said that the Colonial pipeline normally carries 100 million gallons a day, traveling about 2,500 miles from Texas, Louisiana and Alabama to 267 marketing terminals across the East and Southeast. Although nearly 15 percent of the gas stations in Virginia were reporting outages last week, the Washington region has been able to tap into supplies from areas such as New Jersey and Pennsylvania, which can more readily obtain supplies from tanker and other pipelines. Earlier supply problems in Chattanooga, Tenn., and Tallahassee also had eased, he said.

Other areas of the country were not so fortunate. An Atlanta Exxon dealer said that his station’s allocation was only 40 percent of normal.

Mike Thornburgh, a spokesperson at QuikTrip, said that half of the gasoline retailer’s 111 Atlanta area stations were open, up from a quarter last weekend. He said that QuikTrip was trying to keep stores open near commuters and schools. He said he didn’t know when things would return to normal.

“I can’t give a concrete answer because I don’t believe anybody knows,” he said.

Public officials appealed for calm as it appeared that panic buying might exacerbate supply problems if motorists try to keep more fuel than usual in their tanks. The Environmental Protection Agency suspended regulations for antipollution additives to help ease the supply situation.

Georgia Gov. Sonny Perdue provoked some angry comments on the Atlanta Journal Constitution Web site, which quoted him as saying that “there is ample fuel in the city” and that some of the panic was “self-induced.”

“Perdue says we got ample gas supplies,” wrote one reader. “Then why is it that every gas station in my area is out of gas. Some have been out for over 4 days.”

Prices were high in cities hurt by shortages, though not as high as they were immediately after the hurricanes. In Charlotte, price ranged from $3.84 to a high of $4.31 a gallon for regular gasoline. AAA’s Townsend said that travelers to the affected areas should “be prepared for sticker shock, Southern style.”