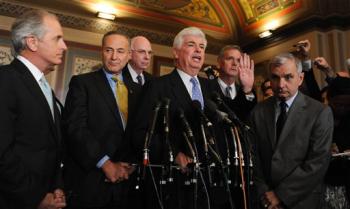 WASHINGTON (AP) – Key Republicans and Democrats reported agreement Thursday on an outline for a historic $700 billion bailout of the financial industry, but there was still resistance from rank-and-file House Republicans despite warnings of an impending panic.

“I now expect we will, indeed, have a plan that can pass the House, pass the Senate, be signed by the president and bring a sense of certainty to this crisis that is sill roiling in the market,” Sen. Bob Bennett, R-Utah, said as members of both parties emerged from a two-hour negotiating session.

Negotiators planned to present the outline at a White House meeting later Thursday with President Bush and the rivals to replace him, Republican John McCain and Democrat Barrack Obama.

Not everyone in the closed-door talks was as optimistic. Rep. Spencer Bachus of Alabama, the only House Republican in the bargaining meeting, stopped short of saying he agreed with the other lawmakers on an imminent deal.

“There was progress today,” said Bachus, the senior Republican on the House Financial Services panel.

Later, he issued a statement saying he was not empowered to strike any deals and there was “no agreement other than to continue discussions.”

Still, the White House called the announcement “a good sign that progress is being made.”

“We’ll want to hear from (Treasury) Secretary (Henry) Paulson and take a look at the details. We look forward to a good discussion at the meeting this afternoon,” said Tony Fratto, the deputy White House press secretary.

A Treasury spokeswoman said the proposal was being reviewed there.

On Wall Street, stock prices were up late in the trading day, but not by as much as earlier in the day.

The core of the plan proposed by the administration just a few days ago envisions the government buying up sour assets of shaky financial firms in a bid to keep them from going under and to stave off a potentially severe recession.

Obama and McCain called for a bipartisan effort to deal with the crisis, little more than five weeks before national elections in which the economy has emerged as the dominant theme.

McCain on Wednesday asked Obama to agree to delay their first debate, scheduled for Friday, to deal with the meltdown. Obama said the debate should go ahead.

Congressional negotiators said Thursday there were few obstacles to a final agreement, although no details of an accord were immediately available.

“There really isn’t much of a deadlock to break,” said Rep. Barney Frank, D-Mass, chairman of the House Financial Services Committee.

But there were fresh signs of trouble in the House Republican Caucus. A group of GOP lawmakers circulated an alternative designed to attract private money back into the credit markets with less government intrusion.

Under that proposal, the government would provide insurance to companies that agree to hold frozen assets, rather than purchase them directly as envisioned under the administration’s plan. The firms would have to pay insurance premiums to the Treasury Department for the coverage.

“The taxpayers haven’t done anything wrong,” said Rep Eric Cantor, R-Va., adding that rather than require them to bear the cost of the bailout, the alternative “pretty much puts the burden on Wall Street over time.”

Boehner, R-Ohio, the minority leader, was huddling with McCain on the rescue. When asked whether the GOP presidential nominee could corral restive Republicans to support the plan, Boehner said, “Who knows?”

Bush told the nation in a televised address Wednesday night that passage of the package his administration has proposed was urgently needed to calm the markets and restore confidence in the reeling financial system.

It was not immediately clear how lawmakers had resolved differences over how to phase in the unprecedented cost – a step demanded by Democrats and some Republicans who want stronger congressional control over the bailout – without spooking markets. The idea of letting the government take an ownership stake in troubled companies as part of the rescue, rather than just buying bad debt, also has been a topic of intense negotiation.

Frank told The Associated Press Thursday both elements would be included in the legislation.

Bush acknowledged Wednesday night that the bailout would be a “tough vote” for lawmakers. But he said failing to approve it would risk dire consequences for the economy and most Americans.

“Our entire economy is in danger,” he said.