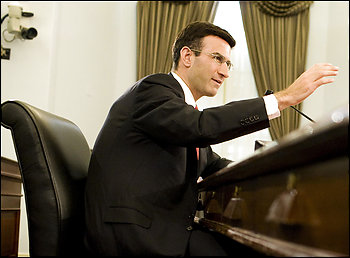 The director of the Congressional Budget Office said yesterday that the proposed Wall Street bailout could actually worsen the current financial crisis.

During testimony before the House Budget Committee, Peter R. Orszag — Congress’s top bookkeeper — said the bailout could expose the way companies are stowing toxic assets on their books, leading to greater problems.

“Ironically, the intervention could even trigger additional failures of large institutions, because some institutions may be carrying troubled assets on their books at inflated values,” Orszag said in his testimony. “Establishing clearer prices might reveal those institutions to be insolvent.”

In an interview later yesterday, Orszag explained using the following example: Suppose a company has Asset X, whose value is recorded on the books as $100. Because of the current economic decline, Asset X’s real value has dropped to $50. If the company takes part in the government bailout and sells Asset X for $50, the company has to report a $50 loss on its books. On a scale of millions of dollars, such write-downs could ruin a company.

Such companies “look solvent today only because it’s kind of hidden,” Orszag said. “They actually are insolvent” already, he said.

In hearings on Capitol Hill so far this week, criticism of the bailout plan put forward by Treasury Secretary Henry M. Paulson Jr. and Federal Reserve Chairman Ben S. Bernanke has largely been restricted to the shape of the $700 billion proposal, how the money will be spent and what sort of oversight Treasury should have.

But Orszag yesterday questioned the wisdom of the plan itself, testifying that “it therefore remains uncertain whether the program will be sufficient to restore trust.”

In yesterday’s interview, Orszag said, “The key question is: What are we buying and what are we paying for it?”

Orszag offered alternatives, such as equity injections into particularly troubled companies, but allowed that those could lead to further problems, as well. In the end, he said, Congress must pass some sort of relief, if only because Wall Street is expecting it.

“If we did nothing, there is a significant risk of another collapse of confidence in the financial markets,” he said.

Then, there is the paperwork cost of the bailout.

The budget office “expects that the administrative costs of operating the program could amount to a few billion dollars per year, as long as the government held all or most of the purchased assets,” he testified, without defining what he meant by “a few.”

Even as the financial markets rallied Thursday and Friday, Orszag said, the credit situation was so dire that “short-term lending was virtually shut down.”

He said that the Treasury was acting as a go-between in short-term lending between banks. Instead of Bank A lending directly to Bank B, as is customary, Bank A no longer had confidence that Bank B could repay the loan.

So Bank A would give the money to the Treasury, which issued a security that was put into the Federal Reserve, which then issued the cash to Bank B.

If the government is forced to intermediate such ordinary transactions, commerce slows, credit confidence remains low, and operational strain is placed on the Treasury and the Fed.

“You don’t want them in the middle of every short-term financial transaction,” Orszag said.

During questioning before the Joint Economic Committee earlier yesterday, Bernanke acknowledged concerns about the bailout’s effect on the budget.

“I think those concerns are very serious,” he said. “But it’s really a question of alternatives.”