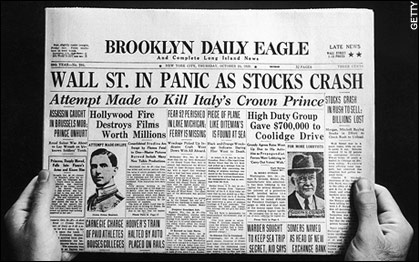 Hard times: central banks have acted to avoid a repeat of 1929

So, here we are – the start of a new world order. After the tumultuous events of the last fortnight, the global economic landscape will never look the same again.

Power has tangibly shifted – away from the United States and the Western world generally, and towards the fast-growing giants of the East. That’s been happening for some years now.

But September 2008 marks the moment when the scale of our excesses, the extent of our debts and the moral bankruptcy of our financial regulatory system finally began to be truly exposed.

I say began to be exposed. Back in March, Standard and Poor’s, the US ratings agency, estimated some $285bn (£156bn) of mortgage-backed securities would eventually be written-off by the global banking sector. On Friday, almost unnoticed amid the panic, that forecast was upped to $378bn.

In reality, total credit losses will be much higher – at least $750bn in my view. But the extent of the 33 per cent one-off increase in S&P’s estimate speaks volumes. It reflects just how little anyone truly knows about either the ultimate size of the sub-prime losses or who ultimately holds the related securities.

But with one in ten US mortgages now “delinquent” or “in foreclosure”, and house prices still falling, such “toxic waste” is burning holes in balance sheets wherever it sits. That’s why this crisis is far from over.

It’s difficult to overstate the enormity of what happened last week. By any standard, the collapse of Lehman Brothers was a dramatic – and alarming event. One of the biggest names on Wall Street, the 158-year old bank was consumed by the scale of its losses and crippled by executive feuds. Deemed by the US Federal Reserve to be “sufficiently unconnected” to the rest of the global financial system, Lehman was allowed to fold.

In contrast, American International Group, the world’s largest insurer, was judged “too interconnected” to collapse. So the Fed effectively “nationalised” AIG – the biggest rescue of a private firm in human history. And it’s only a few weeks, of course, since the even more expensive bail-out of quasi-government lenders Fannie Mae and Freddie Mac – which, between them, account for a mind-boggling $5,300bn of mortgages, around half of America’s home loans.

On top of all that, US Treasury Secretary Hank Paulson sent an $800bn financial rescue plan to Congress. He wants to create a second “Resolution Trust Corporation” – or government-owned asset management company – to take on illiquid mortgage-related debts. The original RTC was established to rescue the US Savings and Loans Associations that went bust in the 1980s.

And by the way, the Fed has also just offered another $125bn of liquidity to banks outside the US that are desperate for dollars and can’t access America’s frozen credit markets – a move co-ordinated with central banks in Japan, the Eurozone, Switzerland, Canada and here in the UK.

The combination of these measures – each of them of enormous significance in its own right – sent stock markets shooting-up on Friday. America’s S&P 500 rose 4.03 per cent and London’s FTSE 100 soared 8.84 per cent, its largest one-day rise ever. But, despite the end-of-week euphoria and trader-talk that “the only way is up”, despite America’s undoubted resolve and Paulson’s determination to do “whatever it takes”, the situation remains very fragile.

Nothing better reflects the amount of fear among banks in America – banks everywhere – than the sky-high rates they’re continuing to charge when lending to each other. Ordinarily, inter-bank (or Libor) interest rates are only slightly above base rates. But with so much uncertainty remaining about the scale and occurrence of “sub-prime” – and with desperate bank executives still so reluctant to “fess-up” their losses – the US Libor rate on money to be paid back in three months is now a staggering 1.5 per cent above base. In recent weeks, Libor rates have shot up in other countries too.

Paulson’s latest liquidity injection has lowered over-night Libor rates for now. But, despite the torrent of cash the US has directed at the credit markets, longer-term inter-bank rates have stayed stubbornly high, and some have gone up further. In other words, even the banks themselves don’t think the rescue plan will work. Expect more – and bigger – liquidity operations in weeks to come.

The trouble is, though, as the bill for these bail-outs keeps rising, so does the possibility that the political consensus will crack and there’ll be an almighty, and debilitating, dust-up. Paulson’s RTC plan, in theory, could restore confidence. By taking sub-prime loans off banks’ books, it could de-ice the inter-bank market, restoring credit lines to households and firms and preventing the “credit crunch” from shifting wholesale, in that fabled phrase, “from Wall Street to Main Street”.

But, in the run-up to the US election in November, Democrats in Congress – and even some Republicans – may decide they’re simply not having it. How much more can the US taxpayer take? It sounds insane, but the liabilities being taken on by the Fed and the US Treasury are now so enormous that the government itself could default. No?

Check out the chart showing the recent spikes in the US 10-year credit default swap. In other words, the market is now pricing-in the genuine possibility that the US will struggle to pay-back some of its long-term T-bills.

That possibility is still deemed to be quite low. But the ultimate financial question – until recently, unthinkable – is now being asked. Yes siree, the mighty US government could default. That’s how much the world has changed.