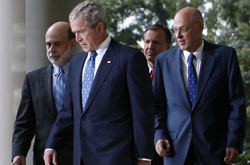 Financial-market wise guys, who had been seized with fear, are suddenly drunk with hope. They are rallying explosively because they think they have successfully stampeded Washington into accepting the Wall Street Journal solution to the crisis: dump it all on the taxpayers. That is the meaning of the massive bailout Treasury Secretary Henry Paulson has shopped around Congress. It would relieve the major banks and investment firms of their mountainous rotten assets and make the public swallow their losses–many hundreds of billions, maybe much more. What’s not to like if you are a financial titan threatened with extinction?

If Wall Street gets away with this, it will represent an historic swindle of the American public–all sugar for the villains, lasting pain and damage for the victims. My advice to Washington politicians: Stop, take a deep breath and examine what you are being told to do by so-called “responsible opinion.” If this deal succeeds, I predict it will become a transforming event in American politics–exposing the deep deformities in our democracy and launching a tidal wave of righteous anger and popular rebellion. As I have been saying for several months, this crisis has the potential to bring down one or both political parties, take your choice.

Christopher Whalen of Institutional Risk Analytics, a brave conservative critic, put it plainly: “The joyous reception from Congressional Democrats to Paulson’s latest massive bailout proposal smells an awful lot like yet another corporatist lovefest between Washington’s one-party government and the Sell Side investment banks.”

A kindred critic, Josh Rosner of Graham Fisher in New York, defined the sponsors of this stampede to action: “Let us be clear, it is not citizen groups, private investors, equity investors or institutional investors broadly who are calling for this government purchase fund. It is almost exclusively being lobbied for by precisely those institutions that believed they were ‘smarter than the rest of us,’ institutions who need to get those assets off their balance sheet at an inflated value lest they be at risk of large losses or worse.”

Let me be clear. The scandal is not that government is acting. The scandal is that government is not acting forcefully enough–using its ultimate emergency powers to take full control of the financial system and impose order on banks, firms and markets. Stop the music, so to speak, instead of allowing individual financiers and traders to take opportunistic moves to save themselves at the expense of the system. The step-by-step rescues that the Federal Reserve and Treasury have executed to date have failed utterly to reverse the flight of investors and banks worldwide from lending or buying in doubtful times. There is no obvious reason to assume this bailout proposal will change their minds, though it will certainly feel good to the financial houses that get to dump their bad paper on the government.

A serious intervention in which Washington takes charge would, first, require a new central authority to supervise the financial institutions and compel them to support the government’s actions to stabilize the system. Government can apply killer leverage to the financial players: accept our objectives and follow our instructions or you are left on your own–cut off from government lending spigots and ineligible for any direct assistance. If they decline to cooperate, the money guys are stuck with their own mess. If they resist the government’s orders to keep lending to the real economy of producers and consumers, banks and brokers will be effectively isolated, therefore doomed.

Only with these conditions, and some others, should the federal government be willing to take ownership–temporarily–of the rotten financial assets that are dragging down funds, banks and brokerages. Paulson and the Federal Reserve are trying to replay the bailout approach used in the 1980s for the savings and loan crisis, but this situation is utterly different. The failed S&Ls held real assets–property, houses, shopping centers–that could be readily resold by the Resolution Trust Corporation at bargain prices. This crisis involves ethereal financial instruments of unknowable value–not just the notorious mortgage securities but various derivative contracts and other esoteric deals that may be virtually worthless.

Despite what the pols in Washington think, the RTC bailout was also a Wall Street scandal. Many of the financial firms that had financed the S&L industry’s reckless lending got to buy back the same properties for pennies from the RTC–profiting on the upside, then again on the downside. Guess who picked up the tab? I suspect Wall Street is envisioning a similar bonanza–the chance to harvest new profit from their own fraud and criminal irresponsibility.

If government acts responsibly, it will impose some other conditions on any broad rescue for the bankers. First, take due bills from any financial firms that get to hand off their spoiled assets, that is, a hard contract that repays government from any future profits once the crisis is over. Second, when the politicians get around to reforming financial regulations and dismantling the gimmicks and “too big to fail” institutions, Wall Street firms must be prohibited from exercising their usual manipulations of the political system. Call off their lobbyists, bar them from the bribery disguised as campaign contributions. Any contact or conversations between the assisted bankers and financial houses with government agencies or elected politicians must be promptly reported to the public, just as regulated industries are required to do when they call on government regulars.

More important, if the taxpayers are compelled to refinance the villains in this drama, then Americans at large are entitled to equivalent treatment in their crisis. That means the suspension of home foreclosures and personal bankruptcies for debt-soaked families during the duration of this crisis. The debtors will not escape injury and loss–their situation is too dire–but they deserve equal protection from government, the chance to work out things gradually over some years on reasonable terms.

The government, meanwhile, may have to create another emergency agency, something like the New Deal, that lends directly to the real economy–businesses, solvent banks, buyers and sellers in consumer markets. We don’t know how much damage has been done to economic growth or how long the cold spell will last, but I don’t trust the bankers in the meantime to provide investment capital and credit. If necessary, Washington has to fill that role, too.

Finally, the crisis is global, obviously, and requires concerted global action. Robert A. Johnson, a veteran of global finance now working with the Campaign for America’s Future, suggests that our global trading partners may recognize the need for self-interested cooperation and can negotiate temporary–maybe permanent–reforms to balance the trading system and keep it functioning, while leading nations work to put the global financial system back in business.

The agenda is staggering. The United States is ill equipped to deal with it smartly, not to mention wisely. We have a brain-dead lame duck in the White House. The two presidential candidates are trapped by events, trying to say something relevant without getting blamed for the disaster. The people should make themselves heard in Washington, even if only to share their outrage.