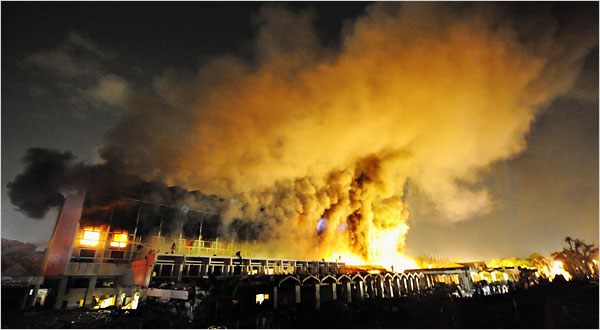 Flames poured from the Marriott Hotel in Islamabad on Saturday after a massive truck bombing.

ISLAMABAD, Pakistan – A huge truck bomb exploded at the entrance to the Marriott Hotel in Islamabad on Saturday evening, killing at least 40 people and wounding more than 150, the police said.

The blast, one of the worst acts of terrorism in Pakistan’s history, went off just a few hundred yards from the prime minister’s house, where all the leaders of government were dining after the president’s address to Parliament.

The toll was expected to grow because of reports that many people had been trapped inside the six-story hotel, which has been a favorite meeting spot of both foreigners and well-connected Pakistanis in the heart of the capital. The building was quickly engulfed in flames and continued to burn for hours Saturday night.

The bomb left a vast crater, some 40 feet wide and 25 feet deep, at the security barrier to the hotel. Witnesses said security guards and their gate posts were buried under a mound of rubble. A line of cars across the street from the hotel were mangled and trees on the street were charred. Windows in buildings hundreds of yards away were shattered.

Witnesses said they dragged dozens of bodies from the lobby of the hotel and an adjacent parking lot, including those of a number of foreigners.

An American Embassy spokesman, Lou Fintor, could not confirm if any American citizens were killed or wounded. “We are in the process of determining the status and welfare of our embassy staff as well as any other Americans who may have been affected, and we are in close contact with the State Department in Washington,” he said.

The bombing was the deadliest to take place in the well-guarded capital, and may have been timed for the day that President Asif Ali Zardari made his first address to Parliament since his election two weeks ago. Mr. Zardari, whose wife, former Prime Minister Benazir Bhutto, was assassinated in December by a suicide bomber, vowed to root out terrorism and extremism and to stop terrorists from using Pakistani soil to attack other countries.

Both he and the prime minister, Yousaf Raza Gilani, condemned the attack and repeated their determination to deal with terrorism with an iron hand, the state news agency, the Associated Press of Pakistan, reported.

The bombing may also have been retaliation by militants for the recent military operations in the tribal area of Bajaur and the adjacent area of Swat, which have reportedly killed scores of militants.

Coming after a bombing in Kabul, Afghanistan, earlier this year at the Serena Hotel, another gathering spot for foreigners, the Marriott attack appeared to send a message not just to Pakistan but to Washington and other Pakistani allies.

There was no immediate claim of responsibility.

The White House on Saturday condemned the bombing, calling it a “reminder of the threat we all face.”

The Islamabad Marriott has been attacked by militants at least twice in the past, including in a suicide attack in January 2007 that killed a policeman. A senior police official, Ashfaq Ahmed Khan, said initial reports suggested that an explosives-laden dump truck was detonated near the entrance.

“The Marriott is an icon,” said Abdullah Riar, a former aide to Mrs. Bhutto. “It’s like the twin towers of Pakistan. It’s a symbolic place in the capital of the country, and now it has melted down.”

One wounded American who works at the embassy here said he had just opened his car door in the parking lot when the explosion erupted. The American, who gave only his first name, Chris, said he had received injuries to his face, neck and shoulder, and was holding a bloody T-shirt to his face.

He said American Embassy personnel were at the scene, trying to help American citizens they said were trapped in the hotel.

Amjad Ali Khan, a guard on duty at a side entrance to the hotel, said that he saw four to five bodies in the hotel parking lot and that he helped carry out 40 bodies from inside the hotel. He said they were “in the lobby and in the restaurant and everywhere.”

“There were very few people injured,” he said. “They were all dead.” He said he saw three Western women who had died from head wounds.

“They are terrorists,” he said when asked who he thought was responsible for the blast.

The Interior Ministry’s antiterrorism cell had warned several days ago that it had information that four or five suicide bombers had been dispatched on missions around the country. The government enforced tight security during the president’s 3 p.m. address, posting army Rangers and police in rings around the Parliament and government buildings.

The Marriott lies nearby, but the Rangers and police may have reduced the security after the event and at 7.30 pm, the time of Iftar, when Muslims break their all-day fast during the Ramadan holiday. The bomb exploded at 8 p.m., when many Pakistanis were inside the banqueting hall at the back of the hotel, taking their evening meal.

The Islamabad police have asked the army to assist in the rescue work and declared a state of emergency in the local hospitals.

Meanwhile, the F.B.I. had offered to send special agents to help investigate the scene of the attack, and to try to determine the driver of the vehicle and the kind of explosives used, said a senior American official, who declined to be identified because of the sensitivity of the matter.

The F.B.I. is awaiting approval from the Pakistani government before dispatching the agents, perhaps as many as 15, the official said.