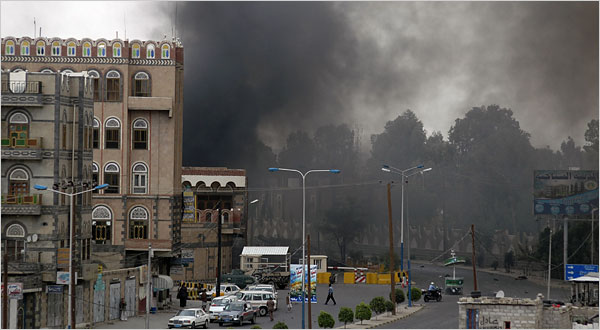 Yemen News Agency, via Reuters: Smoke rose near the U.S. Embassy in Sana, Yemen, on Wednesday after armed militants detonated a car bomb at its gates.

BEIRUT, Lebanon – Heavily armed militants opened fire on the United States Embassy in Sana, Yemen, on Wednesday and detonated a car bomb at its gates, in an attack that left at least 16 people dead including six of the attackers, Yemeni officials said.

No Americans were killed or wounded in the blast or when guards began to return fire, said a Yemeni official, who spoke on condition of anonymity because he was not authorized to discuss the matter.

Yemeni security officials and witnesses said the death toll was at least 16, including four bystanders, one of them an Indian woman. The other dead were six attackers and six security guards, the Yemeni officials said, speaking in return for anonymity because they were not authorized to brief reporters.

Ryan Gliha, an embassy spokesman, said via e-mail that the attack took place at 9:15 a.m. The embassy would remain closed for now, he said, but gave no further details.

It was the deadliest attack in years on an American target in Yemen, a poor south Arabian country of 22 million where militants aligned with Al Qaeda have carried out a number of recent strikes.

The attack began when a car raced up to the heavily fortified embassy compound. Several attackers got out and began firing rocket-propelled grenades and automatic rifles at the guards who returned the fire, the Yemeni official said.

A second car then drove into the compound’s gate and exploded in what appeared to be a suicide bombing, the official said.

The attack was especially shocking to many Yemenis because it came during the Muslim holy month of Ramadan.

Yemen has long been viewed as a haven for jihadists. It became a special concern for the United States in 2000, after Al Qaeda operatives rammed the destroyer Cole in Aden harbor, on Yemen’s southern coast, killing 17 American sailors.

After the terrorist attacks of Sept. 11, 2001, Yemen actively pursued a counterterrorism partnership with the United States, and its American-trained forces have had some important successes in fighting militants.

But over the last two years, jihadists claiming allegiance to Al Qaeda appear to have reorganized, releasing more propaganda material on the Internet and carrying out attacks. In July 2007, suicide bombers killed eight Spanish tourists in eastern Yemen, and there were two unsuccessful attacks on oil installations.

Earlier this year there were several attacks on foreign embassies. In March, mortars fired at the United States Embassy compound in Sana struck a nearby school for girls instead, killing a security guard and wounding more than a dozen students.

The American compound has also been the scene of occasional political violence in previous years, including a large demonstration against the American-led invasion of Iraq in March 2003, in which two Yemenis were fatally shot and dozens wounded.

Yemen has also faced serious security threats on other fronts, including an intermittent rebellion in the north that has kept the country’s military engaged, and continuing riots and instability in the south.

In Washington, Representative Peter Hoekstra of Michigan, the top Republican on the House Intelligence Committee, said that the attack showed that the United States had to maintain its “aggressive counterterrorism programs aimed at fighting the jihadist threat.”

“Today’s attack in Yemen is a potent reminder that America, and Americans abroad, still remain the top targets for jihadist terrorists,” he said in a statement.