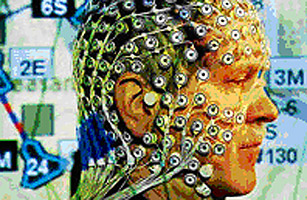 Army scientists want to cram this array of brain-wave reading sensors into a helmet.

Soldiers barking orders at each other is so 20th Century. That’s why the U.S. Army has just awarded a $4 million contract to begin developing “thought helmets” that would harness silent brain waves for secure communication among troops. Ultimately, the Army hopes the project will “lead to direct mental control of military systems by thought alone.”

If this sounds insane, it would have been as recently as a few years ago. But improvements in computing power and a better understanding of how the brain works have scientists busy hunting for the distinctive neural fingerprints that flash through a brain when a person is talking to himself. The Army’s initial goal is to capture those brain waves with incredibly sophisticated software that then translates the waves into audible radio messages for other troops in the field. “It’d be radio without a microphone, ” says Dr. Elmar Schmeisser, the Army neuroscientist overseeing the program. “Because soldiers are already trained to talk in clean, clear and formulaic ways, it would be a very small step to have them think that way.”

B-movie buffs may recall that Clint Eastwood used similar “brain-computer interface” technology in 1982’s Firefox, named for the Soviet fighter plane whose weapons were controlled by the pilot’s thoughts. (Clint was sent to steal the plane, natch.) Yet it’s not as far-fetched as you might think: video gamers are eagerly awaiting a crude commercial version of brain wave technology – a $299 headset from San Francisco-based Emotiv Systems – in summer 2009.

The Army doesn’t move quite as fast as gamers though. The military’s vastly more sophisticated system may be a decade or two away from reality, let alone implementation. The five-year contract it awarded last month to a coalition of scientists from the University of California at Irvine, Carnegie Mellon University, and the University of Maryland, seeks to “decode the activity in brain networks” so that a soldier could radio commands to one or many comrades by thinking of the message he wanted to relay and who should get it. Initially, the recipients would most likely hear transmissions rendered by a robotic voice via earphones. But scientists eventually hope to deliver a version in which commands are rendered in the speaker’s voice and indicate the speaker’s distance and direction from the listener.

“Having a soldier gain the ability to communicate without any overt movement would be invaluable both in the battlefield as well as in combat casualty care,” the Army said in last year’s contract solicitation. “It would provide a revolutionary technology for silent communication and orientation that is inherently immune to external environmental sound and light.”

The key challenge will be to develop software able to pinpoint the speech-related brain waves picked up by the 128-sensor array that ultimately will be buried inside a helmet. Those sensors detect the minute electrical charges generated by nerve pathways in the brain when thinking occurs. The sensors will generate an electroencephalogram – a confusing pile of squiggles on a computer screen – that scientists will study to find those vital to communicating. “We think we can train a computer to understand those squiggles to the point that they can read off the commands that your brain is issuing to your mouth and lips,” Schmeisser says. Unfortunately, it’s not a matter of finding the single right squiggle. “There’s no golden neuron that’s talking,” he says.

Dr. Mike D’Zmura of UC-Irvine, the lead scientist on the project, says his task is akin to finding the right strands on a plate full of pasta. “You need to pick out the relevant pieces of spaghetti,” he says, “and sometimes they have to be torn apart and re-attached to others.” But with ever-increasing computing power the task can be done in real time, he says. Users also will have to be trained to think loudly. “How do we get a person to think something to themselves in a way that leaves a very strong signal in EEGs that we can read off against the background noise?” D’Zmura asks. Finally, because every person’s EEG is different, persons using “thought helmets” will have to be trained so that computers intercepting their unspoken commands recognize each user’s unique mental pattern.

Both scientists pre-emptively deny expected charges that they’re literally messing with soldiers’ minds. “A lot of people interpret wires coming out of the head as some sort of mind reading,” D’Zmura sighs. “But there’s no way you can get there from here,” Schmeisser insists. “Not only do you have to be willing, but since your brain is unique, you have to train the system to read your mind – so it’s impossible to do it against someone’s will and without their active and sustained cooperation.”

And don’t overlook potential civilian benefits. “How often have you been annoyed by people screaming into their cell phones?” Schmeisser asks. “What if instead of their Bluetooth earpiece it was a Bluetooth headpiece and their mouth is shut and there’s blessed silence all around you?” Sounds like one of those rare slices of the U.S. military budget even pacifists might support.