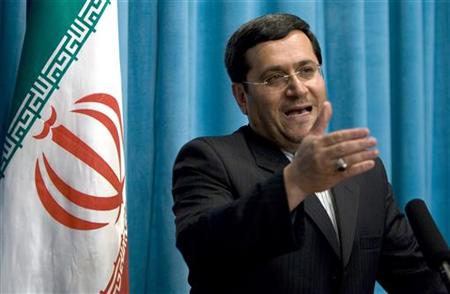 VIENNA (Reuters) – Iran has blocked a U.N. inquiry into whether it researched ways to make a nuclear bomb, the U.N. nuclear watchdog said on Monday, as Britain said it would push hard for tougher sanctions against Tehran.

A confidential IAEA report said Iran had raised the number of centrifuges enriching uranium by 500 to 3,820 since May and was stepping up development of an advanced model able to refine nuclear fuel 2-3 times faster, in defiance of U.N. resolutions.

But a senior U.N. official familiar with the International Atomic Energy Agency findings said Iran seemed a good two years away from enriching enough uranium for an atomic weapon, if it eventually chose to do so.

Iran denies its nuclear work is aimed at developing a bomb.

“On the issue of possible military dimensions to Iran’s nuclear programme, we have arrived at a gridlock. Without Iran’s assistance and cooperation, we cannot move forward,” said a second senior U.N. official.

Iran blamed the IAEA for the impasse. A senior Iranian official, who declined to be named, called on the IAEA to change its approach and work in a “legal and logical” manner.

“We will therefore push hard for further U.N. sanctions in the coming weeks,” a British Foreign Office statement said.

Iran has withstood limited sanctions imposed so far and may count on Russia, at odds with Western powers over Georgia, to hold up harsh action by the U.N. Security Council, analysts say.

The IAEA report will be debated by the body’s 35-nation board of governors at talks starting on Sept 22, with the possibility Western powers might seek a resolution against Iran.

Iran had stockpiled 480 kg (1,050 pounds) of low-enriched uranium so far, the report by the Vienna-based IAEA said.

It would need 1,700 kg (3,740 pounds) to convert into high-enriched uranium (HEU) for fuelling an atom bomb, said U.N. officials who spoke on condition of anonymity.

“That would be a significant quantity, one unit of HEU, and would take on the order of two years,” said one official.

Still, the report showed Iran had markedly accelerated its pace of enrichment, with centrifuges now running at around 85 percent capacity compared with 50 percent in May, U.S. nuclear analyst David Albright said in a commentary.

Iran appeared to have largely overcome a high rate of centrifuge breakdown that seriously restricted output, he said.

“Iran is making significant progress in developing and operating its centrifuges,” said Albright.

Washington says it wants a diplomatic solution to the nuclear standoff but has not ruled out military action as a last resort. Iran, the No. 4 oil exporter, says its nuclear programme is a peaceful drive for an alternative source of electricity.

In its last report in May, the IAEA said Iran appeared to be withholding information needed to explain intelligence that it had linked projects to process uranium, test high explosives and modify a missile cone in a way suitable for a nuclear warhead.

ElBaradei called on Iran then for “full disclosure” — namely, going beyond flat denials without providing access to sites, documentation or relevant officials for interviews to substantiate their stance.

The report said nothing to that end had been done by Iran, which has acknowledged some of the activity cited but said it was for conventional military purposes only.

“Regrettably the agency has not been able to make any substantial progress on the alleged (weaponization) studies and other associated key remaining issues which remain of serious concern,” the report said.

It said IAEA investigators had stressed to Iran that the intelligence documentation was detailed and consistent enough “that it needs to be taken seriously” by Iran.

But, in a nod to Iranian objections, U.N. officials said Iran was understandably worried about divulging information it felt could compromise its security as tensions fester between Iran and the United States and Israel.

They said another obstacle was the refusal of Western powers to let the IAEA provide Iran hard copies of the intelligence for perusal. Iran has said it has seen only electronic versions that could easily have been doctored.

Iran’s IAEA ambassador, Ali Asghar Soltanieh, told Reuters Tehran would not offer further explanations before “the agency delivers the documents to us”. He said IAEA demands went way beyond Iran’s legal obligations to cooperate and “we have done more than enough to explain these baseless allegations”.

The report said the IAEA was trying to break the deadlock by urging Iran to specify what information was wrong and what was right in its view, but Tehran had not responded so far.