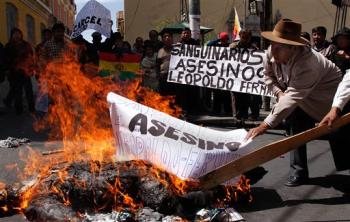 Many of the blockades were dismantled as a goodwill gesture on Sunday as both sides sought to establish ground rules for negotations, but political unrest continued Monday as more than a thousand Morales supporters marched on the U.S. Embassy in Bolivia’s capital, La Paz.

Morales expelled Washington’s ambassador last week, accusing him of encouraging the protests. Ambassador Philip Goldberg called the allegation “false and unfounded,” but a series of tit-for-tat explusions followed between the United States, Bolivia and Venezuela.

“If he hadn’t expelled him we would be tearing down the U.S. Embassy today,” protest leader Edgar Patana said as activists burned an American flag and effigies of opposition governors.

In Chile, Foreign Minister Alejandro Foxley said Monday that the presidents would try to get a dialogue going after a failed attempt last week by a diplomats from Argentina, Colombia and Brazil. The Organization of American States secretary general, Jose Miguel Insulza, was also attending, as were presidents for all major South American nations save Peru.

Bolivia’s opposition was not present for the meeting, and it wasn’t immediately clear how rhetorical support for Morales in Santiago might help solve the political crisis. Morales’ vice president, Alvaro Garcia, was meeting late into Sunday night with Tarija Gov. Mario Cossio, who was representing the opposition governors, to establish ground rules for talks.

The gravest challenge to Morales’s nearly 3-year tenure as Bolivia’s first indigenous president stems from his struggle with the four lowland provinces where Bolivia’s natural gas riches are concentrated and where his government has all but lost control.

The provinces want more autonomy from Morales’ government and insisting he cancel a planned referendum on a new constitution that would help him centralize power, run for a second consecutive term and transfer fallow terrain to landless peasants. Morales says the new charter is needed to empower Bolivia’s long-suppressed indigenous majority.

Arriving in Chile on Monday, Morales’ close ally President Hugo Chavez of Venezuela said “a conspiracy directed by the U.S. empire” was at work in Bolivia.

Goldberg denied Sunday that his meetings with opposition governors and Washington’s distribution of aid to their states amounted to an attempt to undermine Morales.

“I would like to say that all the accusations made against me, against the Embassy and against my nation are completely false and unjustified,” he told reporters in La Paz.