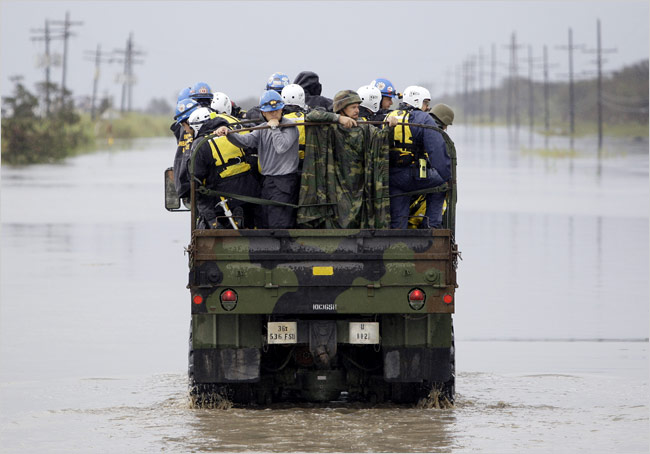 HOUSTON – Emergency officials pursued their rescue efforts on Sunday after Hurricane Ike barreled across a wide swath of Texas, deluging the city of Galveston with a wall of water, flooding coastal towns and leaving extensive damage across metropolitan Houston.

Across the Gulf Coast, rescue workers scoured waterlogged neighborhoods and struggled to race down streets that had turned to rivers, looking for some of the more than 140,000 Texans who refused orders to evacuate and were now stranded in flattened homes or inundated towns. Some had been rescued, but thousands more were waiting on emergency rescues. State and federal officials said Hurricane Ike had claimed at least four lives, two of them in Texas and two more in Louisiana.

More than 500 National Guardsmen descended on southeast Texas on Sunday, and in Houston, where more than half of the city was without power, the Police Department announced a weeklong nighttime curfew, from 9 p.m. until 6 a.m. President Bush, a former governor of Texas, said he would be traveling to the state this week to assess the storm’s aftermath and offer support to local officials.

R. David Paulison, head of the Federal Emergency Management Agency, said it was too early to determine the full impact of the storm, and urged evacuees hoping to return to remain where they are for at least another day.

“We’re asking people just to be patient.” he said in an interview on CNN on Sunday. “Don’t be in a hurry. If you’re in a safe place, whether a shelter or hotel or motel, or staying with friends and family, just stay right there.”

With wind gusts approaching 100 miles per hour, Ike, a 600-mile-wide Category 2 hurricane, peeled sheets of steel off skyscrapers here, smashed bus shelters and blew out windows, sending shattered glass and debris across the nation’s fourth-largest city, with a population of 2.2 million.

The storm came ashore on Galveston Island, which in 1900 suffered one of the worst hurricanes to hit the United States. Winds covered the main highway with a layer of boats and debris, shutting it down. In Orange, Tex., near the Louisiana coast, the sea rose so rapidly that people were forced to flee to attics and roofs, and the city used trucks to rescue them, the local police said.

Yet officials expressed relief that the damage was not as catastrophic as federal and state officials had warned it would be.

“Fortunately the worst-case scenario did not occur,” Gov. Rick Perry of Texas said at a news conference on Saturday. “The good news is the surge was not as big as we thought it would be.”

Still, many people were struggling to cope in the storm’s aftermath. At Galveston Ball High School, emergency personnel were evacuating all of the more than 200 island residents who weathered the storm and were now desperate to leave the devastated island. Tensions ran high and patience was wearing thin: the island has lost all power and running water, and swarms of mosquitoes have filled the air. Many said the storm was not half as difficult as what came after.

Shanikka Jones, who was waiting to board one of 12 buses headed to San Antonio with her two small children, said she had no idea where she would stay or what she would do once she got off the island. But her children were getting sick, and baby formula was running low, she said.

“I’ve even started to eat less because I don’t want to have to use the bathroom,” said Ms. Jones, describing the foul scene at the shelter and in many other places on the island. The authorities said the hurricane could still prove to be the most punishing storm to hit the area since Hurricane Alicia did 25 years ago.

Almost the entire metropolitan area lost power, and authorities said more than three million people were trying to manage in the dark. Utility officials say it could be weeks before power is restored throughout the region.

The magnitude of the power loss and the flooding raised the possibility that some major oil refineries could take more than a week to reopen. As a result, gasoline prices jumped an average of 6 cents a gallon around the country. The Associated Press reported that a gallon of gas rose above $5 at a few stations in Tennessee and Alabama. In Texas, officials feared a gasoline shortage as oil refiners assessed the damage from Ike.

Still, crude oil prices edged below $100 a barrel in electronic trading Sunday, Bloomberg News reported, and gasoline futures prices declined on signs that the damage to refineries and offshore drilling platforms was not as severe as feared.

Some officials at refining companies said early damage reports were encouraging because the center of the storm missed the refineries. The surge of water into Galveston’s shipping channel, an important depot for imported oil, was not as strong as many had feared, and officials hope to reopen it early in the week if no major obstacles are blocking shipping lanes.

The expectations at nightfall Friday that a virtual tsunami of 20-foot waves would crash directly into Galveston, a city of 57,000, were fortunately dashed after midnight when the eye of the hurricane hit shore. City officials estimated the seas rose about 12 feet, though some tide gauges showed a 15-foot rise, and federal officials said it would take time to determine the exact number.

Whatever the height of the surge, longtime residents of Galveston said the damage was still the worst they had seen.

More than two million people evacuated coastal areas of Texas and Louisiana before the storm struck. But the authorities estimated that more than 100,000 people throughout the region, including 20,000 in Galveston, had disregarded mandatory evacuation orders.

At least 100,000 homes were inundated by surging waters, while isolated fires broke out around the region when trees and flying objects fell on electrical transformers, causing sparks.

In Houston, only the downtown area and the medical center section had power as of Sunday morning.

“It’s going to be weeks before we get power to the last customers,” said Mike Rodgers, a spokesman for Entergy Texas, the primary electricity provider between Houston and the Louisiana border. Mr. Rodgers said damage to the electric grid was much more widespread than after Hurricane Rita, which hit the area in 2005.

President Bush issued a major disaster declaration for 29 counties in Texas and said federal officials were prepared to help with recovery efforts.

“Obviously, this is a huge storm that is causing a lot of damage not only in Texas but also in parts of Louisiana,” Mr. Bush said. “Some people didn’t evacuate when asked, and I’ve been briefed on the rescue teams there in the area. They’re prepared to move as soon as weather conditions permit.”

Senator Barack Obama, the Democratic nominee for president, canceled an appearance on “Saturday Night Live,” aides said, because he felt it would be inappropriate.

Civic leaders asked residents to conserve water and call 911 only in life-or-death situations.

“We don’t know what we’re going to find,” said Mayor Lyda Ann Thomas of Galveston, according to The Houston Chronicle. “We hope we’ll find that the people who didn’t leave here are alive and well.”

Despite the devastating flooding in Galveston, experts said the storm surge had not been as severe as some predicted.

Benton McGee, a hydrologist with the United States Geological Survey, told The Associated Press that the surge at Galveston, where the storm made landfall, was about 11 feet. Forecasters had predicted a surge of up to 25 feet.

But Stacey Stewart, a senior hurricane analyst at the National Hurricane Center, defended the government’s predictions of a 15- to 20-foot surge and said it would take time to determine the exact rise in sea level.

“I wouldn’t go out and say that surge values weren’t as high as predicted,” he said. “We have received reports of 15 feet and the sea wall being topped.”

Mr. Stewart said a shift in the storm’s track to the north just before landfall might have kept the rise in sea levels on the lower side of what had been forecast.

Mike Varela, chief of the Galveston Fire Department, said flooding was 8- to 10-feet deep in some areas of the city. “The low-lying neighborhoods are extremely flooded right now,” Chief Varela said.

Twenty-two men aboard a crippled freighter, which was adrift off the coast of Galveston when the hurricane hit, came through the storm safely, the Coast Guard said.

Initial reports from residential neighborhoods around Houston suggested that flooding and property damage were not as serious as some had feared early in the morning after hearing reports from downtown, where windows were shattered on skyscrapers and hotels.

At Reliant Park, in southwest Houston, the storm tore chunks from the retractable roof of the football stadium, the park’s president and general manager told The Associated Press. The game between the Texans and the Baltimore Ravens scheduled for Monday night would probably have to be postponed, he said.

Late in the afternoon, Air Force helicopters began plucking people out of flooded homes in Galveston and carrying them to shelters on the mainland.

Joyce Williams, 58, arrived on the first chopper with her 80-year-old mother, Eunice Haley, who had spent the night in a house with four feet of water on the ground floor. Ms. Williams was trying to get her mother out of the swamped house when she saw the helicopter and waved.

Steven Rushing, who had tried to ride out the storm at his Galveston home with his family, eventually left by boat. Mr. Rushing, six relatives and two dogs wound up at a hotel in Galveston.

“I know my house was dry at 11 o’clock, and at 12:30 a.m., we were floating on the couch putting lifejackets on,” he said. Once the water reached the television, four feet off the floor, Mr. Rushing said, he retrieved his boat from the garage and loaded his family into it.

“I didn’t keep my boat there to plan on evacuating because I didn’t plan on the water getting that high, but I sure am glad it was there,” he said.