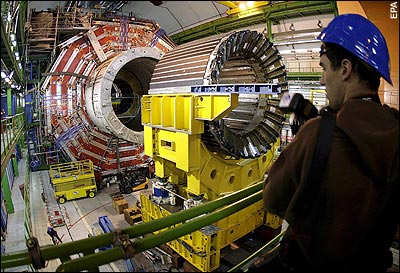 The work of the scientists was not derailed and insiders scoffed at claims that the hackers were “one step away” from the systems controlling the experiment itself. The engineering team completed four days of scheduled work in the first 24 hours but what physicists are really waiting for is the big bang machine’s first collisions.

Apart from being wide of the mark from a scientific point of view, fears that the LHC might bring the world to an end this week were in any case premature because it was never going to smash any particles so early on.

This week’s successful start-up means that that should now happen sooner than expected, perhaps as early as the first week in October.

Doomsayers take note: there is still a slim chance that a microscopic (and harmless) black hole will be created, but only once the accelerator starts colliding protons together at close to its maximum energy.

The hackers appear to have targeted the computer system of the Compact Muon Solenoid Experiment, one of the four detectors that will be analysing the progress of the experiment.

James Gillies, a spokesman for CERN, the European Laboratory for Network Collision, home of the LHC, said: “We don’t know who they were but there seems to be no harm done. It appears to be people who want to make a point that CERN was hackable,” he added.

CERN officials are now confident that the collider will have started experiments to generate new physics well before world leaders visit on October 21 to inaugurate the project.

Many countries will send their heads of state or government to the event: President Sarkozy of France, President Couchepin of Switzerland and President Köhler of Germany have the date in their diaries, and either President Medvedev of Russia or Vladimir Putin may attend.

The British Prime Minister, however, has apparently decided to skip the opportunity to be publicly associated with black holes. Responding to a query about whether Gordon Brown would be there to celebrate the passing of the Apocalypse, Downing Street told The Times “to call back nearer the time”. Describing the CERN team’s progress, Mr Gillies said: “There is a 31-day schedule before the first high-energy collisions, and on Wednesday they did Days 1 to 4.”

On Wednesday night, one beam was circulated around the LHC’s ring about 300 times, and on Thursday, the anti-clockwise beam was fired around the accelerator for half an hour so it could be “captured” and made to travel in neat, compact pulses.

Protons make about 11,000 laps per second, which means 20 million circuits have been achieved. The next crucial step is likely next week, when the captured beams will be fired in opposite directions, and crashed into each other inside the four huge detectors.

A couple of weeks later is the real moment of truth. The LHC’s superconducting magnets will be fired up to 70 per cent of maximum power, producing proton beams with an energy of 5 teraelectronvolts (TeV) – 5,000 billion electrovolts – and crashing them together. “That’s where the new physics starts,” Dr Gillies said. It is possible that scientists will start accumulating the evidence that could prove supersymmetry, the hypothesis that all particles have a twin.

The plan next year is to ramp it up to its maximum energy of 7TeV. The accelerator will then be providing results that should shed light on some of the central questions in physics.