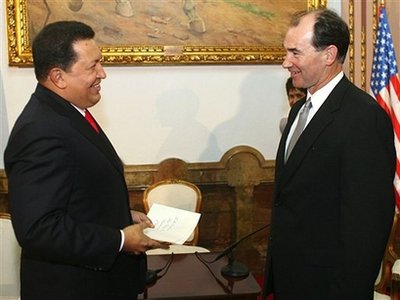 CARACAS, Venezuela – President Hugo Chavez said the U.S. ambassador has 72 hours to leave Venezuela and that he’s recalling his ambassador from Washington.

“They’re trying to do here what they were doing in Bolivia,” Chavez said.

“That’s enough … from you, Yankees,” he said, using an expletive.

The socialist leader said Venezuela’s ambassador to Washington, Bernardo Alvarez, would return to the U.S. “when there’s a new government in the United States.”

The move by Chavez brings relations with Washington to a new low and raises questions about whether the diplomatic clash could eventually hurt trade. Venezuela is a major oil supplier to the United States, which is the country’s No. 1 client.

Chavez announced the decision during a televised speech, hours after saying his government had detained a group of alleged conspirators in a plot to overthrow him.

Chavez accused the group of current and former military officers of trying to assassinate him with backing from the United States. He didn’t offer evidence.

U.S. officials have repeatedly denied Chavez’s accusations that Washington has backed plots against him.

Asked about Chavez’s remarks, U.S. Embassy spokeswoman Jennifer Rahimi said: “We saw the speech and we’re investigating, but we haven’t seen anything official.”

Chavez warned last month that Duddy could soon be “packing his bags” after the diplomat lamented that U.S. and Venezuelan officials have not been cooperating in the war on drugs.

Duddy has said that deteriorating diplomatic relations between Caracas and Washington were giving drug smugglers the upper hand.