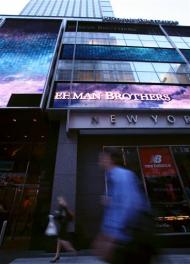 NEW YORK (Reuters) – Lehman Brothers Holdings Inc’s survival was called into question as its chief executive scrambled to sell assets to cover losses from toxic real estate investments, sending shares down as much as 46 percent.

The investment bank’s need to raise desperately needed cash, broadly outlined by CEO Dick Fuld on Wednesday, failed to assuage investor concerns. The stock dropped $2.92, or 40 percent, to $4.33 on Thursday after falling as low as $3.88.

The steady stream of grim tidings and the dearth of details from the company stoked fears that some of Lehman’s clients and trading partners might take their business to more stable firms.

Only six months since the collapse and eventual fire-sale purchase of venerable investment bank Bear Stearns, confidence in the Wall Street business model has faded.

“Although many investors thought it would be avoided, customers of Lehman Brothers are becoming more and more skittish in their dealings with them,” said William Lefkowitz, options strategist at vFinance Investments, a brokerage firm in New York. “If this fear continues to grow, that could lead to the demise of Lehman Brothers,”

The shares have lost more than three-quarters of their value since Monday and more than 90 percent from their 52-week high of $67.73 last November. The crisis came on a difficult day for Lehman, the 7th anniversary of the September 11 attacks in New York that severely damaged its headquarters across the street from the World Trade Center.

“As much as they try to … calm investors down, investors don’t have yet the answers they need,” said Rose Grant, managing director of Eastern Investment Advisors. “There’s a complete lack of faith, lack of confidence and lack of trust.”

But Lehman — founded in 1850 by three German immigrants who traded cotton — garnered most of the market’s attention.

The company reported a record quarterly loss of $3.9 billion on Wednesday, and said it would spin off distressed assets and sell a stake in its asset management business. But details about the size, scope and timing of the potential sales were few — leading to fresh fears about its plans.

“We thought getting news out of Lehman was going to clear the dark cloud, but it really doesn’t. It just leaves us with a company that’s limping along, that may or may not make it,” said Arthur Hogan, chief market analyst at Jefferies & Co.

The company has written down billions of dollars in assets in the last year — largely holdings of complex mortgage-backed securities. And over the last several months, the bank has been battling rumors of defecting clients and talk of a takeover at a low price.

“It’s unfortunate that we’re in the kind of position now where events can take over. The stock is telling us that Dick Fuld is running out of options,” said Michael Holland, founder, Holland & Co, which oversees more than $4 billion of investments. “Unfortunately for Fuld, who has been very adamant about keeping Lehman independent, he has to find a partner now, someone to acquire them.”

One possible suitor, Goldman Sachs, is not looking to buy Lehman, sources familiar with the situation said, reflecting concerns that integrating two big investment banks would be too disruptive. There has been market speculation that larger rival Goldman would step in and acquire Lehman.

Lehman’s survival may hinge on the sale of a 55 percent stake in Neuberger Berman, its asset management business. But not everyone is confident a deal will be consummated.

“We are not even sure that the auction process for 55 percent of their asset management group is going to work because the people that win the auction need to find the money to buy it,” Hogan said.

Lehman’s growing problems have led to questions about CEO Fuld and his strategy to get the firm on more solid footing.

“What you have is a loss of confidence in management, and they’ve got to start doing things instead of saying they’re going to do things.” said William Smith, president of Smith Asset Management in New York. “I’m in shock as to how Fuld let this get away from him. From what I understand, the guy was a great executive.”

Fuld won a reputation as a survivor and top-notch leader since coming to Lehman as a trader in 1969. He endured in-fighting that led to the company’s sale to Shearson/American Express in 1984 and was running Lehman when it was spun off — undervalued and unwanted — in 1994.

“Historically, Fuld has been someone you don’t bet against when times get tough. This time, things may be too tough,” said Holland. “The stock price is saying that.”

The Lehman worries were not just affecting the stock. Its credit protection costs soared to a record, and some of its bonds traded near distressed levels.

Lehman’s bond prices tumbled, sending some yields well above levels widely considered as distressed. Its 4.25 percent notes due in 2010 were yielding nearly 22 percentage points more than Treasuries — more than twice the level that traders consider distressed — according to data from MarketAxess.

On the commodities side, nervous futures clients of Lehman were pulling out their money. Lehman lost 22 percent of its Futures Commission Merchant assets last month, data from the U.S. Commodity Futures Trading Commission (CFTC) show.

Not everyone on Wall Street was ready to bury the firm.

“I would tend to want to bet in opposition: that Lehman not only survives, but that it certainly has a business model that works, excluding some of the stuff it used to have,” said Robert Albertson, chief investment strategist at Sandler O’Neill & Partners.

Goldman downgraded Lehman to “neutral” from “buy,” and removed the stock from its Americas buy list Thursday.

“Management did not successfully put to rest the issues that had been pressuring the stock,” William Tanona of Goldman wrote.

Oppenheimer’s Meredith Whitney said Lehman’s initiatives were a “step in the right direction,” but she continued to expect a tough 2008 for the investment bank.

Lehman faces challenges to earnings, given difficult capital markets for the next several quarters and potential write-downs of its remaining risk exposures, Whitney said.