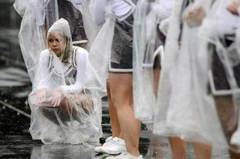 High temperatures this season were 3rd lowest on record

Summer is officially over in Alaska, and if you got out in the sun to enjoy both days of it you were lucky.

Those were the two July days the temperature at the offices of the National Weather Service in Anchorage hit 70 degrees or better.

“Those temperatures occurred at the beginning of the month (of July) and were immediately followed by a long stretch of cool and wet weather.

“With only two days above 70 degrees this year, that sets a new record for the fewest days to reach 70,” the weather-watching agency reported Friday.

Add to the lack of heat and sunshine what the agency calls “an astonishing 77%” of days colder than normal, and you get the picture.

This summer was every bit as bad as you thought it was.

On average, Anchorage sees 16 days that hit 70 or better.

Not this year. Not since 1980 has there been a summer less reflective of global warming than this one. Consider these 2008 benchmarks from the weather service that say this month won’t be any better:

Over the course of the past 87 years, September temperatures have reached 70 only 17 times, and two of those 70-degree days came in the same year, according to the weather service.

On average, a 70-degree September day comes along about once every five years, but those days also tend to come in warm years, not years like this one.

Overall, the weather service ranks the summer of 2008 as having the third coolest average high temperatures since record keeping began. Only the summers of 1973 and 1971 were worse. In overall average daily temperatures, 2008 ranked 11th place.

All that stopped this summer from winning a place as coldest ever was, strangely enough, its cloudy grimness.

“What seemed like endless days of cloud cover kept the daytime highs averaging 3 degrees below normal,” according to the weather service. “Inversely, the cloud cover helped to keep overnight temperatures up.

“The minimum temperatures in the summer of 2008 only ranked as the 34th coolest on record.”

Now, there’s something to cheer about. That and the fact that, though the summer left the birds and the bees struggling, the mosquitoes seemed to be doing just fine.

So what can you expect from here on out?

“September climatologically opens with high temperatures around 60 and overnight lows in the middle 40s,” says the local office of the weather service. Followed by October, when temperatures start to really drop, to the 20s and 30s by the end of the month.

That is the normal pattern.

The National Climate Prediction center is calling for “below normal temperatures along southern Alaska (through September).” Warm waters flowing north into the Gulf of Alaska mean Southcentral Alaska could be back to “normal” — if there is such a thing — by October or November.

That would be just in time for the snow-sport season that lasts about twice as long as summer.

Meanwhile, in case you forgot, the days are getting shorter, too.