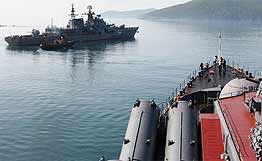 “The decision to conduct Russian-Venezuelan naval exercises was adopted at the meeting between presidents in July this year,” Dygalo said.

“During the exercise, ships and naval aircraft will practice coordinated maneuvering, search-and-rescue, and communications,” he said.

Russia announced last year that Russia’s Navy had resumed, and would build up its continual presence in different regions of the world’s oceans.

A naval task force from Russia’s Northern Fleet, consisting of the Admiral Kuznetsov aircraft carrier, the Udaloy-Class destroyers Admiral Levchenko and Admiral Chabanenko, as well as auxiliary vessels, conducted from December 2007 to February 2008 a two-month tour of duty in the Mediterranean Sea and North Atlantic.