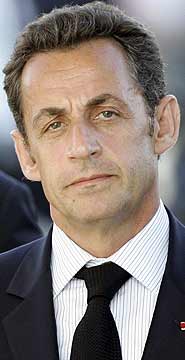 “Surely this is a strange mixing up of categories,” said Mr Morin, who was a senior centrist party MP until he joined the Cabinet of Mr Sarkozy last year.

“Is it useful to gather data such as telephone numbers, sexual orientation and details of taxes and assets and so on without knowing exactly what is the point?” he asked.

Mr Morin was slapped down by Michèle Alliot-Marie, the Interior Minister, who heads Mr Sarkozy’s drive to implement the law-and-order pledges of his 2007 election campaign. “It is odd that Mr Morin has not managed to find my telephone number,” she said. “I would have set his mind at rest.”

The Government is depicting Edvige as a modernised version of the files that have long been gathered by officers of the Renseignements Généraux (RG). This police intelligence service has acted as the eyes and the ears of the state, spying on citizens under various names since it was created by Joseph Fouché, Napoleon Bonaparte’s police chief. Civil liberties groups said that the RG has files on 20 million people.

The police spy service, whose officers snoop in cafés, work places, housing estates and union meetings, was amalgamated this year with the DST (Departement du Surveillance du Territoire), the counter-espionage and anti-terrorist agency that equates to Britain’s MI5. Edvige will be the main tool of the new combined super-agency, called the Direction Centrale du Renseignement Intérieur (Central Directorate of Internal Intelligence).

The anti-Edvige opposition started after the National Commission on Information Technology and Freedom (CNIL), the data privacy watchdog, forced the Government to publish the secret decree that created Edvige in July. This alerted rights groups to the potentially vast scope of the network, whose full name is Exploitation Documentaire et Valorisation de l’Information Générale.

“With just a few clicks of the mouse, any government official or civil servant will have access to intimate data,” said Francois Bayrou, leader of the centrist MoDem party and a fierce opponent of President Sarkozy. The Socialist party demanded that the Government put the system under judicial supervision.

Michel Pezet, a former member of the CNIL agency, said: “The Edvige database has no place in a democracy. There is nothing in the decree that sets limits or a framework. Whether the database is used with or without moderation depends only on orders from up high. The electronic Bastille is upon us.”

Hundreds of associations, including the main judges’ union, civil liberties defenders, gay rights groups and leftwing lawyers have joined the anti-Edvige mutiny. Fifteen lawsuits have been filed against it at the Conseil d’Etat, the highest civil court, and an online petition has gathered more than 100,000 signatures.

Most newspapers – with the exception of the pro-Sarkozy Le Figaro – have joined the anti-Edvige campaign. “The defence of public order cannot justify such a threat to individual liberties,” said Le Monde. The newspaper L’Alsace said: “Under the allure of a woman’s Christian name, it is the continuation of Fouché’s tradition with a data network.”

Defenders of Edvige pointed out that everyone is electronically tracked these days and that people volunteer their biographies and private details on Facebook and other networking sites.