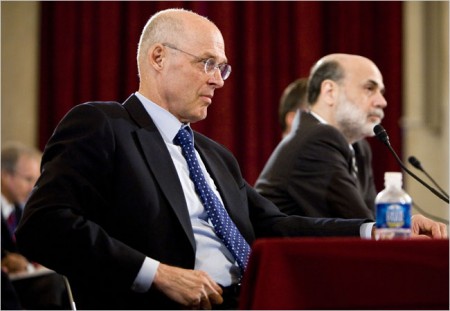 WASHINGTON – Senior officials from the Bush administration and the Federal Reserve on Friday called in top executives of Fannie Mae and Freddie Mac, the mortgage finance giants, and told them that the government was preparing to place the two companies under federal control, officials and company executives briefed on the discussions said.

Henry M. Paulson Jr., the Treasury secretary, and Ben S. Bernanke, the Federal Reserve chairman, were involved in the takeover of Freddie Mac and Fannie Mae.

The plan, which would place the companies into a conservatorship, was outlined in separate meetings with the chief executives at the office of the companies’ new regulator. The executives were told that, under the plan, they and their boards would be replaced and shareholders would be virtually wiped out, but that the companies would be able to continue functioning with the government generally standing behind their debt, people briefed on the discussions said.

It is not possible to calculate the cost of any government bailout, but the huge potential liabilities of the companies could cost taxpayers tens of billions of dollars and make any rescue among the largest in the nation’s history.

The drastic effort follows the bailout this year of Bear Stearns, the investment bank, as government officials continue to grapple with how to stem the credit crisis and housing crisis that have hobbled the economy. With Bear Stearns, the government provided guarantees, and the bulk of its assets were transferred to JPMorgan Chase, leaving shareholders with a nominal amount.

Under a conservatorship, the common and preferred shares of Fannie and Freddie would be reduced to little or nothing, and any losses on mortgages they own or guarantee could be paid by taxpayers. Shareholders have already lost billions of dollars as the stocks have plunged more than 80 percent this year.

A conservatorship would operate much like a pre-packaged bankruptcy, similar to what smaller companies use to clean up their books and then emerge with stronger balance sheets. It would allow for uninterrupted operation of the companies, crucial players in the diminished mortgage market, where they are now responsible for nearly 70 percent of new loans.

The executives were told that the government had been planning to announce the decision as early as Sunday, before the Asian markets reopen, the officials said.

For months, administration officials have grappled with the steady erosion of the books of the two mortgage finance giants. A fierce behind-the-scenes debate among policy makers has been waged over whether to seize the companies or let them work out their problems. Even after the companies are put under government control, debates will continue over whether they should be independent and how they should operate over the long term.

The declines in the housing and financial markets apparently forced the administration’s hand. With foreign governments increasingly skittish about holding billions of dollars in securities issued by the companies, no sign that their losses will abate any time soon, and the inability of the companies to raise new capital, the administration apparently decided it would be better to act now rather than closer to the presidential election in two months.

Just five weeks ago, President Bush signed a law to give the administration the authority to inject billions of dollars into the companies through investments or loans. In proposing the legislation, Treasury Secretary Henry M. Paulson Jr. said that he had no plan to provide loans or investments, and that merely giving the government the authority to backstop the companies would provide a strong shot of confidence to the markets. But the thin capital reserves that have kept the two companies afloat have continued to erode as the housing market has steadily declined and the number of foreclosures has soared.

As their problems have deepened – and the marketplace has come to expect some sort of government rescue – both companies have found it difficult to raise new capital to absorb future losses. In recent weeks, Mr. Paulson has been reaching out to foreign governments that hold billions of dollars of Fannie and Freddie securities to reassure them that the United States stands behind the companies.

The debt securities the companies issue to finance their operations are widely owned by mutual funds, pension funds, foreign governments and big companies.

Officials said the participants at the meetings included Mr. Paulson, Ben S. Bernanke, the chairman of the Fed, and James Lockhart, the head of both the old and new agency that regulates the companies. The companies were represented by Daniel H. Mudd, the chief executive of Fannie Mae, and Richard F. Syron, chief executive of Freddie Mac. Also participating was H. Rodgin Cohen, the chairman of the law firm Sullivan & Cromwell, who was representing Fannie.

Officials and executives briefed on the meetings said that Mr. Mudd and Mr. Syron were told that they would have to leave the companies.

Spokesmen at the two companies did not return telephone calls seeking comment.

The meetings reflected the reality that senior administration officials did not believe they could wait for some kind of financial tipping point, as happened with Bear Stearns, which was saved from insolvency in March by government intervention after its stock plummeted and lenders withheld their capital.

Publicly, administration officials have tried to bolster the companies because the nation’s mortgage system relies on their continued ability to purchase mortgages from commercial lenders and pull the housing markets out of their slump.

But privately, senior officials have been critical of top executives at the companies, particularly Freddie Mac. They have raised concerns about major risks to taxpayers of a bailout of companies whose executives have received huge compensation packages. Mr. Syron, for instance, collected more than $38 million in compensation since he joined the company in 2003.

Although Mr. Syron promised regulators earlier this year that he would raise $5.5 billion from investors, he has failed to make good on that promise – even as Fannie Mae raised more than $7 billion. Mr. Syron was slated to step down from the chief executive position last year, but that was delayed when his appointed successor, Eugene McQuade, chose to leave the company.

With the possible removal of the top management and the board, it is no longer clear who would appoint new management.

Mr. Paulson had hoped that merely having the authority to bail out the two companies, which Congress provided in its recent housing bill, would be enough to calm the markets, but if anything anxiety has been increasing. The clearest measure of that anxiety has been the gradually widening spread between interest rates on Fannie- or Freddie-backed mortgage securities and rates for Treasury securities, making home mortgages more expensive. The stock prices of the companies have also plunged.

With Fannie and Freddie guaranteeing $5 trillion in mortgage-backed securities, and a big share of those held by central banks and investors around the world, Mr. Paulson appears to have decided that the stakes are too high to take chances.

The Treasury Department is required by the new law to obtain agreement from the boards of Fannie and Freddie for a capital infusion. The exception is if the companies’ regulator, Mr. Lockhart, determines that the companies are insolvent or deeply undercapitalized it could take the companies over anyway.

Charles Calomiris, a professor of economics at Columbia Business School, said delaying a rescue would only increase the risks and costs.

“The last thing you want to do is give a distressed borrower more time, because when people are in distress they tend to take a lot of risks,” he said. “You don’t want zombie institutions floating around with time on their hands.”