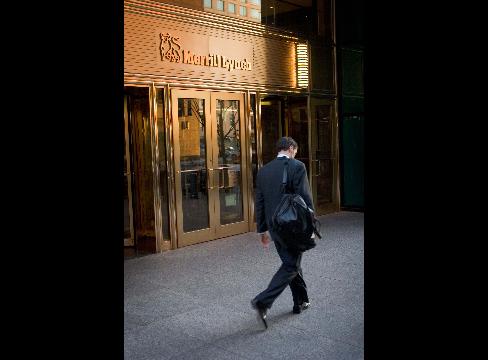 Goldman added the third-biggest U.S. securities company to its “conviction sell” list, according to a report by analysts including William Tanona. The share-price estimate on the stock was lowered 23 percent to $22, compared with yesterday’s closing price of $26.21.

Merrill, battered by more than $40 billion of credit market writedowns, has sold mortgage-linked assets to reduce risk and free up capital. The company trades at 1.25 times book value, compared with 0.95 for Citigroup Inc., the only firm that’s reported larger writedowns and losses stemming from the credit market crunch, according to data compiled by Bloomberg.

“Merrill currently trades at the highest price-to-book multiple in our large-cap brokerage universe, despite having some of the most significant exposures to troubled assets such as CDOs, mortgages and leveraged loans,” said the report, dated yesterday. “With these markets still under pressure, we believe additional writedowns and book-value deterioration will continue to plague the stock.”

Merrill is rated the equivalent of sell by 4 of 20 firms, including Goldman, according to recommendations compiled by Bloomberg. The same number recommend clients buy the stock while the remaining 12 rate Merrill the equivalent of neutral.

The credit crunch has produced more than $500 billion of credit losses and writedowns at the world’s biggest banks and securities firms. Merrill, with $51.8 billion, ranks second after Citigroup’s $55.1 billion, data compiled by Bloomberg show.

Merrill is in talks to sell mortgages and other debt to Korea Asset Management Corp. for less than $200 million, a person familiar with the negotiations said. The talks are faltering because of a dispute over price, said Lee Chol Hwi, the Korean firm’s chief executive officer, in a Sept. 3 interview in Seoul.

Failure to reach an agreement may indicate Merrill and smaller rival Lehman Brothers Holdings Inc. have to cut prices as mortgage-related losses widen. Lee said state-run Korea Asset can afford to be patient because the U.S. financial crisis will probably push prices lower.

Goldman said “very weak” third-quarter results from investment banks and financial-services companies will weigh down brokerages over the next two months.

“Dislocations across many of the financial markets as well as additional de-leveraging are resulting in a meaningful slowdown in overall corporate and institutional activity,” the Goldman report said.

To contact the reporters on this story: Chua Kong Ho in Shanghai at kchua6@bloomberg.net; Brett Miller in Tokyo at Bmiller30@bloomberg.net.