And it is Georgia who started this disaster:

BBC NEWS: “Fighting between Russia and Georgia began on 7 August after the Georgian military tried to retake the breakaway region of South Ossetia by force.” (Medvedev: Saakashvili is a political corpse) 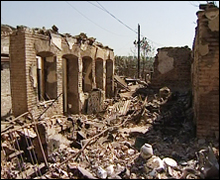 As the last of the refugees returned to the war-scarred city of Tskhinval, the horrors they’d experienced while waiting for evacuation are gradually coming to light. A video filmed on a mobile phone, which appears to show Georgian troops firing on civilian buildings, has surfaced on the Internet.

The video was apparently recorded by a Georgian soldier as he manned a machine gun. His cry of ‘Yoo hoo!’ as he fired on the building reminded viewers of ‘a child playing a video game’ – but they were real bullets and real human targets.

An investigation into crimes allegedly committed by Georgian troops is currently underway and the exact number of casualties has yet to be established.

Accurate estimates of the death toll have been hampered by the chaos that took over the city during the fighting. Many rushed to bury their friends and relatives in their own gardens, school playgrounds and on hospital grounds. They felt it was too dangerous to venture onto the city streets.

Svetlana Nanieva and others like her didn’t get the closure of a proper burial for her son.

“My house was burnt down and my son died in the fire. Nothing was left of him. I have nothing left,” she cried.

Her neighbour, also named Svetlana, says she was lucky to lose only her house and not her family. She managed to run to a bomb shelter just minutes before a Georgian artillery bombardment levelled her street.

“Two pregnant women were killed on our street. One was killed by a bomb and the other was beheaded and left on the street,” said Svetlana Gogloeva.

The city’s Jewish quarter took the brunt of the bombing. No wonder then that Russia’s General Military Prosecutor chose this emotionally charged site to share the results of his investigation thus far with the media.

“There was no suggestion that they wanted to destroy military equipment. They shot at houses and civilians basically,” said prosecutor Sergey Fridinsky.

He said more than a thousand homes have been completely destroyed and many more damaged.