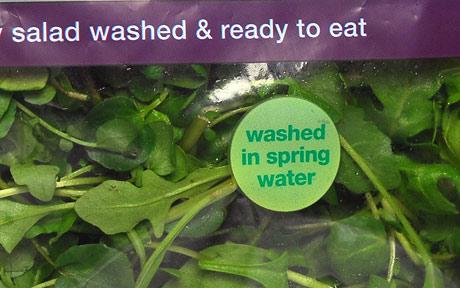 “In their efforts to eat healthily, people are eating more salad products, choosing to buy organic brands and preferring the ease of ‘pre-washed’ bagged salads from supermarkets, than ever before,” he said.

“All of these factors, together with the globalisation of the food market, mean that cases of salmonella and E.coli poisoning caused by salads are likely to rise in the future.

“This is why it’s important to get a head start with understanding how contamination occurs now.”

Prof Frankel said just because some labels claimed food was pre-washed did not necessarily make it safe to eat.

“There are many kinds of salad bags being marketed as washed and ready-to-eat,” he said at the Food Micro 2008 conference in Aberdeen.

“It is about individual choice but people should be aware of the risks so they can make informed decisions about whether they want to wash their food or not.”

Salmonella and E.coli live in the guts of cows and egg-ducts of chickens, and contamination of meat can occur during slaughtering but recent outbreaks of food poisoning highlight the dangers associated with contaminated salad or vegetables.

Prof Frankel’s research, carried out with the University of Birmingham, found that salmonella bacteria are able to use their flagella – the stringy “propellors” designed to aid their movement – to grip salad leaves and contaminate them.

Scientists know that salmonella and E.coli 0157 – a strain that can cause serious sickness in humans – can spread to salads and vegetables if they are fertilised with contaminated manure or come into contact with contaminated products.

Until now they did not understand how the germs managed to bind to the leaves.

Professor Frankel said they would try to identify the factors that made some leaves less susceptible to salmonella to protect others from contamination in future.

He said: “Discovering that the flagella play a key role in salmonella’s ability to contaminate salad leaves gives us a better understanding than ever before of how this contamination process occurs.

“Once we understand it, we can begin to work on ways of fighting it.”