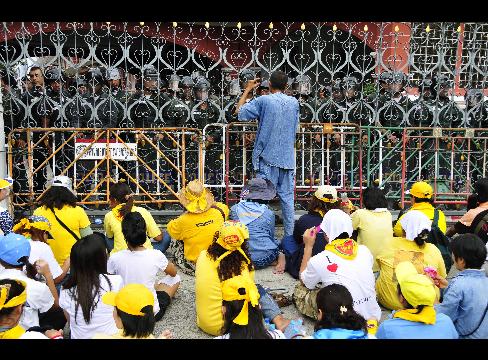 ``We can’t let the protests go on,” Samak said at a press briefing at military headquarters in the Thai capital. “I am acting to defuse the problem.”

Pro-government demonstrators wielding knives, swords and metal bars earlier marched to Government House to confront the People’s Alliance for Democracy, which has occupied Samak’s office compound for a week. Samak’s supporters broke through two lines of unarmed police before reaching the anti-government protesters, who charged at them with weapons and fired gunshots.

Samak’s decree is a change of strategy from his previous “soft and gentle” approach to the demonstrators who accuse him of working on behalf of former Prime Minister Thaksin Shinawatra. Leaders of the People’s Alliance, camped at Government House among their 12,000 supporters, including women and children, have vowed to stay until the premier quits.

The decree bans gatherings of more than five people, and “will be revoked in the next few days,” Samak told reporters. “It won’t last long.”

Thailand’s benchmark SET Index fell to a 19-month low today, down 24 percent since the campaign to oust Samak began on May 25. The baht is at its lowest in a year.

The People’s Alliance is seeking a government that doesn’t include allies of Thaksin, who fled to the U.K. on Aug. 11 to avoid corruption charges. The group has called for a mostly appointed Parliament to take over from Samak’s party, which last year won the first election since a 2006 coup on the back of rural support for Thaksin.

“We will continue to fight,” Chamlong Srimuang, a People’s Alliance leader and retired general, told supporters, according to NBT television. “The government has done too much damage to the country.”

The Election Commission said today Samak’s People Power Party should be dissolved for alleged vote buying in December elections, after studying a July 8 conviction of a senior party member, state-controlled NBT television Channel reported. It will send the case to the Constitutional Court, which may take months to reach a verdict.

The People’s Alliance has entrenched itself at Samak’s office, setting up barbed-wire barriers and arming themselves with metal poles, golf clubs and knives.

“For the emergency decree to carry any weight, it has to be enforced,” said Thitinan Pongsudhirak, director of the Institute for Strategic and International Studies at Chulalongkorn University in Bangkok. “We’re looking at an intense, do-or-die brinksmanship here.”

By continuing to occupy Government House against the law, the People’s Alliance is “baying for blood,” he added.

The pro-government supporters started gathering two days ago at Sanam Luang, a field a few miles from Government House. Comprising Bangkok taxi drivers and people from northeast Thailand, Thaksin’s political base, the group decried the government’s peaceful handling of the People’s Alliance so far.

Police officers easily gave way to the pro-government protesters last night, taking pictures on their mobile phones as they passed by. After the two sides clashed and the gunshots were fired, the police moved in again to separate the two sides and closed surrounding roads.

Three people were shot, one in the chest, the Public Health Ministry said in a statement. A 55-year-old man died from injuries to the head and body, it said.

“The situation should improve now,” Supreme Military Commander Boonsrang Niumpradi told Channel 3 after the order was issued. The anti-government protesters may now “be willing to negotiate,” he said.