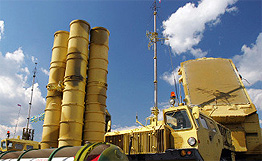 Commenting on an article in the Sunday Telegraph newspaper saying Russia is using the plans as a bargaining chip in its standoff with America, Ruslan Pukhov, director of Moscow-based Center for Analysis of Strategies and Technologies, said: “In the current situation, when the U.S. and the West in general are stubbornly gearing toward a confrontation with Russia after the events in South Ossetia, the implementation of a lucrative contract on the deliveries of S-300 [air defense systems] to Iran looks like a logical step.”

The U.S. and Israel were alarmed by media reports, which started circulating as early as 2005, on the possible delivery of S-300 surface-to-air missiles to Iran, as these systems could greatly improve Iranian defenses against any air strike on its strategically important sites, including nuclear facilities.

The advanced version of the S-300 missile system, called S-300PMU1 (SA-20 Gargoyle), has a range of over 150 kilometers (over 100 miles) and can intercept ballistic missiles and aircraft at low and high altitudes, making the system an effective tool for warding off possible air strikes.

However, Russia’s Federal Service for Military-Technical Cooperation said the issue of the delivery of S-300 air defense missile systems to Iran was not a subject of current or past negotiations.

Israeli defense sources, however, said in July that Iran was expected to take delivery of Russian S-300 air defense systems by the end of 2008.

Pukhov said: “This may be true. While Russia and the West were on good terms, the contract could have been ‘frozen’ for the time being. But now may be the perfect time to move forward with the fulfillment of the S-300 contract.”

According to the Russian analyst, S-300 missiles and previously delivered Tor-M1 missiles would help Iran build a strong network of long- and medium-range ‘defensive rings’ to thwart any attempts to destroy key nuclear facilities in the country.

“Anyone attempting to threaten Iran with aerial bombardment would have to consider the possibility of strong and effective resistance,” the expert said.

“Our missile and technical capability completely depends on the efforts of Iranian scientists,” he said.