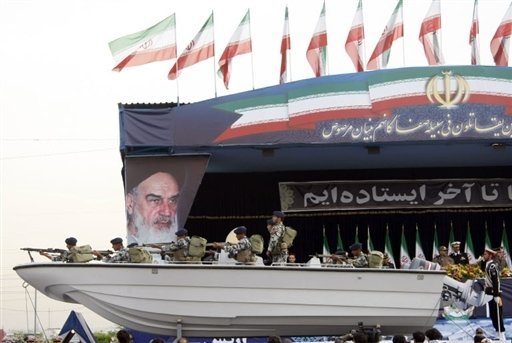 “The unrestrained greed of the US leadership and global Zionism… is gradually leading the world to the edge of a precipice,” Jazayeri said, citing the unrest in Afghanistan, Iraq, Sudan and Georgia.

“It is evident that if such a challenge occurs, the fake and artificial regimes will be eliminated before anything,” he said, without naming any countries.

Iran does not recognise Israel, which is often described by officials in Tehran as a “fake regime.”

The United States and its staunch ally Israel, the region’s sole if undeclared nuclear armed nation, accuse Iran of seeking atomic weapons under the guise of a civilian nuclear programme.

Iran has vehemently denied the allegations, insisting its nuclear drive is aimed solely at providing electricity for a growing population when its reserves of fossil fuels run out.

The United States has never ruled out military action against Iran over its defiance of international demands for an enrichment freeze, but so far is pursuing the diplomatic route with calls for more sanctions.

Iran has repeatedly vowed a crushing response to any attacks and it has flexed military muscles in recent years by holding war games and showing off an array of home-grown weaponry and missiles.

Another top military commander said Iran was prepared to “take the enemies off-guard” and would unveil more weapons in case of an attack.

“Some of the equipment of our armed forces have been announced but there are important things hidden whose effect would be shown on the day (of any attack),” deputy army commander Abdolrahim Mousavi told Fars news agency.

During war games in July which provoked international concern, aides to the supreme leader Ayatollah Ali Khamenei warned that Iran would target US bases and US ships in the Gulf as well as Israel if it was attacked.

Iran also test-fired its Shahab-3 missile which it says puts Israel within range.

Iran is under three sets of UN Security Council sanctions over its refusal to freeze enrichment and risks further sanctions for failing to give a clear response to an incentives package offered by six world powers in return for a halt to the sensitive work.

Iranian officials have repeatedly said they have no intention of freezing enrichment and that the country is currently operating about 4,000 uranium enrichment centrifuges and installing several thousand more.