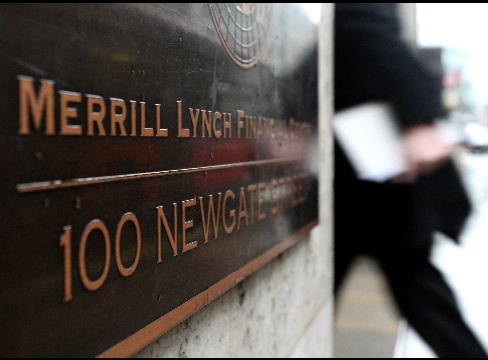 Aug. 26 (Bloomberg) — Merrill Lynch & Co., Wachovia Corp., Lehman Brothers Holdings Inc. and the rest of the U.S. finance industry are about to find out how expensive credit has become.

Banks, securities firms and lenders have a record $871 billion of bonds maturing through 2009, according to JPMorgan Chase & Co., just as yields are at their most punitive compared with Treasuries. The increase in yields may cost them as much as $23 billion more in annual interest versus a year ago based on Merrill Lynch index data.

Higher refinancing expenses will restrict the ability of banks to borrow in the capital markets and lend, further cutting off credit to consumers and businesses and curbing what is already the slowest growing economy since 2001. Standard & Poor’s said last week that it had a “negative” outlook on almost half of the 50 highest-rated financial institutions in the U.S. as of June 30, the highest proportion in 15 years.

“The gears of capitalism are grinding to a halt,” said Mirko Mikelic, senior bond fund manager at Grand Rapids, Michigan-based Fifth Third Asset Management, which oversees $21 billion in assets. “There is a tremendous concern over the banking sector and a scramble right now for capital.”

The Federal Reserve’s quarterly lending survey released Aug. 11 said that more banks tightened credit for consumers and business borrowers. About 65 percent indicated they tightened standards on credit card loans over the previous three months, up “notably” from about 30 percent in the April survey.

“The credit crunch is only now beginning because bank capital is so constricted by losses to date, that they will have to begin shutting off credit to households and corporations and that’s when we get the defaults,” David Goldman, the former head of fixed-income research at Bank of America Corp.’s securities unit in New York, said in a Bloomberg Radio interview.

Goldman, who is now an investor, said he shut down a fund he ran because the markets are likely to become “brutal.”

Interest-rate derivatives imply that banks are even becoming hesitant to lend to each other amid the flood of maturing debt.

They are charging each other a premium of 78 basis points over what traders predict the Fed’s daily effective federal funds rate will average over the next three months. That’s up from 24 basis points in January, and may widen to 85 basis points, or 0.85 percentage point, by mid-December, approaching the record levels set last year, prices in the forwards market show.

Merrill Lynch, the third-biggest U.S. securities firm, has $26.5 billion of bonds maturing this year and $35.5 billion in 2009, according to data compiled by Bloomberg, the most of any broker. The New York-based company paid 2.25 percentage points more than the three-month London interbank offered rate to sell $1.2 billion of two-year floating-rate bonds in May. A year earlier, it paid a spread of 5 basis points.

Wachovia, which reported an $8.9 billion loss in the second quarter, the widest in its history, has $34.5 billion of debt maturing in 2008 and 2009. New York-based Lehman, the securities firm that had more than $8 billion in credit losses in the past 12 months, has about $30.4 billion coming due by the end of 2009.

“We have taken several actions to enhance liquidity, such as reducing the dividend expense reductions and a reduction in our balance-sheet growth,” Phillips-Brown said.

Ian Lowitt, Lehman’s chief financial officer, told investors on June 16 that the firm doesn’t expect to return to the bond market this year and has “completed our funding plan for 2008.”

Because banks make money on the difference between their borrowing costs and the rates they charge on loans, any added debt expense is likely to eat into earnings, according to Diane Vazza, head of global fixed income research at S&P in New York.

In response to a slump in demand for their bonds, financial firms, which have incurred $504 billion of writedowns and credit losses since the start of 2007, are selling assets such as mortgage securities and collateralized debt obligations at fire- sale prices to pay down looming maturities. Merrill Lynch in July agreed to sell $30.6 billion of CDOs at a fifth of their face value. Lehman is also exploring the sale of all or part of its asset-management business, Neuberger Berman LLC.

Wachovia, which has more than 55 percent of its balance sheet funded by core deposits, is offering the highest CD rates in the industry, said Richard Bove, an analyst at Ladenburg Thalmann & Co. in Lutz, Florida. “They want to escape the pressure of the funding markets,” he said.

The flood of maturing debt is a byproduct of a boom in short-term bond issuance between 2005 and the first half of 2007 by financial institutions taking advantage of demand from money funds and some of the lowest borrowing costs on record.

Banks sold $960.8 billion of so-called floaters between 2005 and 2007, according to JPMorgan. About $260 billion, or about 30 percent, of the debt coming due in the remainder of this year is floating-rate notes.

“They wanted to borrow the money at the cheapest levels possible and floating-rate notes helped them achieve that,” said JPMorgan’s Roever.

Merrill Lynch has $13 billion of floating-rate notes due this year, while Wachovia has $7.5 billion, the most of any commercial bank, according to Bloomberg data. Goldman Sachs Group Inc. and Morgan Stanley, the two biggest securities firms and both based in New York, have at least $5 billion maturing.

The trouble now is demand from specialized money funds that readily bought the debt, swelling their assets under management to $200 billion in August last year, has evaporated amid their own losses. The funds, referred to as enhanced cash funds and run by firms such as Bank of America, now hold about $50 billion, according to Peter Crane, president of Crane Data LLC, a Westborough, Massachusetts firm that tracks money-market funds.

Banks may be able to raise at most $110 billion in floating- rate notes, less than half the amount coming due, Roever said.

Firms that can’t raise enough funds by selling assets or attracting deposits will be forced to rely more on selling commercial paper and related money-market securities that typically mature in nine months or less, said Christopher Whalen, co-founder of independent research firm Institutional Risk Analytics in Torrance, California. That may reduce their ability to offer long-term loans, according to Whalen.

“You can’t build a banking business on short-term funding,” he said. “Lending long and borrowing short is the classic mistake that led to all the big bank failures in the past.”

To contact the reporter on this story: Pierre Paulden in New York at ppaulden@bloomberg.net