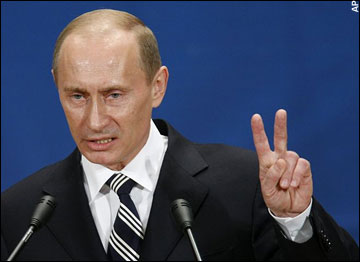 If the Bush administration proceeds with its plan to deploy its Missile Defense System in Poland, Russian Prime Minister Putin will be forced to remove it militarily. He has no other option. The proposed system integrates the the entire US nuclear arsenal into one operational-unit a mere 115 miles from the Russian border. It’s no different than Khrushchev’s plan to deploy nuclear missiles in Cuba in the 1960s.

Early last year, at a press conference that was censored in the United States, Putin explained his concerns about Bush’s plan:

Nuclear weapons specialist, Francis A. Boyle, says the Bush administration’s plans represent the “longstanding US policy of nuclear first-strike against Russia.” In Boyle’s article “US Missiles in Europe: Beyond Deterrence to First Strike Threat” he states:

“By means of a US first strike about 99%+ of Russian nuclear forces would be taken out. Namely, the United States Government believes that with the deployment of a facially successful first strike capability, they can move beyond deterrence and into “compellence.”…This has been analyzed ad nauseam in the professional literature. But especially by one of Harvard’s premier warmongers in chief, Thomas Schelling –winner of the Nobel Prize in Economics granted by the Bank of Sweden– who developed the term “compellence” and distinguished it from “deterrence.” …The USG is breaking out of a “deterrence” posture and moving into a “compellence” posture. (Global Research 6-6-07)

Bush’s real goal is to force Moscow to conform to Washington’s diktats or face the prospect of first-strike nuclear annihilation. Putin must respond.

Putin needs to present his case before the UN General Assembly emphasizing how the proposed US system upsets the nuclear balance of power and poses a direct threat to Russia’s national security. He should give an account of US activities in Central Asia since the fall of the Berlin Wall showing how the Bush administration has pursued a hostile policy of encirclement and strangulation towards the Russian Federation. The US has brought most of the former Soviet satellites into NATO, including Poland, Latvia, Lithuania, Estonia and now is seeking membership for Georgia and Ukraine right on Russia’s border.

The US has expanded its military installations in other areas of Central Asia, primarily Afghanistan, posing long-range problems for the entire region.

The Bush administration has also used its intelligence agencies and NGOs to foment political unrest and topple regimes which were sympathetic to Moscow in its “color-coded” revolutions. Eurasia is now inundated with American puppets who get their marching-orders from the White House.

Also, the US and its allies have declared Kosovo, a vital part of Serbian territory, independent without UN approval. Serbia is a traditional ally of Russia’s. Many analysts now believe that the recent fighting in South Ossetia was directly connected to the Bush administration’s blatant disregard for Serbia’s sovereignty.

“Some people have the illusion that you can do everything just as you want, regardless of the interests of other people. Of course it is for precisely this reason that the international situation gets worse and eventually results in an arms race. But we are not the instigators. We do not want it. Why would we want to divert resources to this? And we are not jeopardizing our relations with anyone. But we must respond. Name even one step that we have taken or one action of ours designed to worsen the situation. There are none. We are not interested in that. We are interested in maintaining a good atmosphere.” Putin added exasperated, “So what should we do?” The present situation has brought us “the brink of disaster!”

Russia has complied with its treaty obligations and removed all of its heavy weapons from the Eastern Europe and put them behind the Ural Mountains. They have reduced their military by 300,000.

At the same time Washington has increased its arms shipments to new allies in Eastern Europe and is building two new military bases in Romania and Bulgaria. Missile Defense components and radar are going up in the Czech Republic and Poland. Obviously, Russia cannot continue to disarm unilaterally while neighboring states bulk up with new US-made weapons systems.

When Putin heard that the Bush administration was developing “bunker-busting” nuclear weapons he said to Bush:

“It would be better to look for other ways to fight terrorism than create low-yield nuclear weapons that lower the threshold for using these weapons, and thereby put humankind on the brink of nuclear catastrophe. But they don’t listen to us. They are not looking for compromise. Their entire point of view can be summed-up in one sentence: ‘Whoever is not with us is against us.'”

It wasn’t Russia who scrapped the Anti-Ballistic Missile Treaty (ABM) That was the Bush administration, too.

American expansionism has thrust the world into another arms race pitting East against West Cold War-style. The present system of international security has been upended and we are moving inexorably towards a military showdown between the two nuclear-armed powers.

As Putin stated at the press conference, “I am convinced that we have reached that decisive moment when we must seriously think about the architecture of global security.”

Russia is experiencing a Renaissance. 20 million people have been raised from poverty since Putin took office 8 years ago. The Russian economy has been growing by 7% a year, real incomes are growing by an astonishing 12% per year and Moscow has become a thriving center of global trade. Oil and natural gas have restored Russia to its formal role as one of the great world’s great powers. The last thing Putin wants is a nuclear standoff with the United States. But he will not shirk from his responsibilities either. If the Missile Defense system is deployed, Putin will be forced to raise the stakes and send warplanes over the construction site. That is the logical first-step that any responsible leader would take before removing the site altogether.

Bush should consider very carefully whether he wants to go ahead with this game of nuclear chicken or not. Putting a knife to Moscow’s throat is an act of aggression equal to invading Iraq, only this time the victim has the ability to fight back.