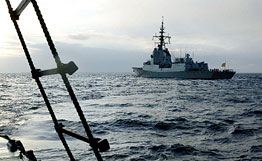 INSTANBUL/MOSCOW, August 23 (RIA Novosti) – NATO has sent a Polish frigate and a U.S. destroyer through the Bosporus to boost its presence in the Black Sea, where it is delivering humanitarian cargoes to Georgia, a source in the Turkish navy said.

An officer said the Russian Navy was aware of the ships’ movements, and would continue its operations in support of Georgia’s separatist republic of Abkhazia.

“The Black Sea fleet continues to carry out its task of maritime traffic security patrols off the coast of Abkhazia,” Captain Igor Dygalo said.

The ORP General Pulaski and the USS McFaul joined two ships from Germany and Spain that entered the sea earlier Friday.

The Turkish navy source expected the NATO presence in the Black Sea to grow to about seven vessels.

Russia has expressed doubts that NATO vessels need to be in the Black Sea, and promised to respond swiftly to any provocations against its Black Sea Fleet.

Tensions between NATO and Russia are high following the recent conflict over Georgia’s breakaway region of South Ossetia.