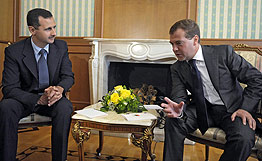 Syrian President Bashar al-Assad arrived in Russia Wednesday on a two-day visit to discuss bilateral relations and regional developments, in particular the situation in the Middle East and Iraq.

“We are ready, and Dmitry Medvedev has confirmed this, to review a Syrian request to purchase new types of weapons,” Sergei Lavrov said following the meeting between Medvedev and Assad.

“We will supply Syria primarily with weapons of a defensive nature that will not disturb the strategic balance in the region,” he added.

In an interview with Russian business daily Kommersant Assad said before his trip: “Our position is we are ready to cooperate with Russia in any project that can strengthen its security… I think Russia really has to think of the response it will make when it finds itself closed in a circle.”

Israeli media reported on Monday that Russia was planning to deploy Iskander surface missiles in Syria and its Baltic exclave of Kaliningrad, in response to a proposed U.S. missile shield in Central Europe and arm sales by the U.S. and Israeli to Georgia.

When asked if Syria, a major importer of Russian weapons, would agree to consider the Russian air defense offer, Assad said: “In principle, yes. We have not yet thought about it.” The issue of installing Iskander missile-defense systems had been raised by Syria several years ago he added.