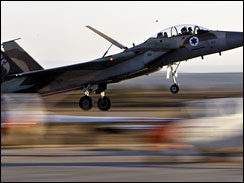 (ABC/AP) Israel is building up its strike capabilities amid growing anxiety over Iran’s nuclear ambitions and appears confident that a military attack would cripple Tehran’s atomic program, even if it can’t destroy it.

Such talk could be more threat than reality. However, Iran’s refusal to accept Western conditions is worrying Israel as is the perception that Washington now prefers diplomacy over confrontation with Tehran.

The Jewish state has purchased 90 F-16I fighter planes that can carry enough fuel to reach Iran, and will receive 11 more by the end of next year. It has bought two new Dolphin submarines from Germany reportedly capable of firing nuclear-armed warheads – in addition to the three it already has.

And this summer it carried out air maneuvers in the Mediterranean that touched off an international debate over whether they were a “dress rehearsal” for an imminent attack, a stern warning to Iran or a just a way to get allies to step up the pressure on Tehran to stop building nukes.

According to foreign media reports, Israeli intelligence is active inside Iranian territory. Israel’s military censor, who can impose a range of legal sanctions against journalists operating in the country, does not permit publication of details of such information in news reports written from Israel.

The issue of Iran’s nuclear program took on new urgency this week after U.S. officials rejected Tehran’s response to an incentives package aimed at getting it to stop sensitive nuclear activity – setting the stage for a fourth round of international sanctions against the country.

Israel, itself an undeclared nuclear power, sees an atomic bomb in Iranian hands as a direct threat to its existence.

Israel believes Tehran will have enriched enough uranium for a nuclear bomb by next year or 2010 at the latest. The United States has trimmed its estimate that Iran is several years or as much as a decade away from being able to field a bomb, but has not been precise about a timetable. In general U.S. officials think Iran isn’t as close to a bomb as Israel claims, but are concerned that Iran is working faster than anticipated to add centrifuges, the workhorses of uranium enrichment.

“If Israeli, U.S., or European intelligence gets proof that Iran has succeeded in developing nuclear weapons technology, then Israel will respond in a manner reflecting the existential threat posed by such a weapon,” said Israeli Deputy Prime Minister Shaul Mofaz, speaking at a policy forum in Washington last week.

The Iranian leader has in the past called for Israel’s elimination, though his exact remarks have been disputed. Some translators say he called for Israel to be “wiped off the map,” while others say a better translation would be “vanish from the pages of time” – implying Israel would disappear on its own rather than be destroyed.

Iran insists its uranium enrichment is meant only for electricity generation, not a bomb – an assertion that most Western nations see as disingenuous.

In other developments:
* The Israeli military said Wednesday an officer filmed ordering a soldier to abuse a bound and blindfolded Palestinian prisoner has resigned his command of an army battalion but would continue to serve elsewhere. A military statement said Lt.Col. Omri Borberg asked to be removed from his post in the wake of the incident in the West Bank when a soldier shot a captured Palestinian demonstrator in the foot with a rubber-coated bullet from close range. Human rights group B’Tselem, which publicized the video, issued a statement deploring the military’s decision not to press criminal charges.

* Israel’s prime minister pledged to free more than 150 Palestinian prisoners in a meeting Wednesday with President Mahmoud Abbas, a gesture meant to energize their sluggish peace talks. The release could also boost the prestige of the embattled Palestinian leader, whose Fatah movement is engaged in a tense power struggle with the militant Islamic Hamas. The meeting at Prime Minister Ehud Olmert’s official Jerusalem residence was the first since the Israeli premier announced last week that he would resign next month because of corruption investigations against him.

* There’s a new songwriter in cyberspace: Israel’s president, Shimon Peres. And composers from countries including Iran are writing music for his song, `Ray of Hope.’ Aide Yoram Dori said Peres wrote the song a year ago. It’s about peace, his favorite theme. Peres, who’s 84, won the Nobel Peace Prize in 1994. Peres posted his lyrics on Songweavers.com, a site that connects lyricists and composers. Among the dozens who wrote music was Sadri Ghandehari from Tehran, Iran. Israel and Iran are bitter enemies.

Israeli policymakers and experts have been debating for quite some time whether it would even be possible for Israel to take out Iran’s nuclear program. The mission would be far more complicated than a 1981 Israeli raid that destroyed Iraq’s partially built Osirak nuclear reactor, or an Israeli raid last year on what U.S. intelligence officials said was another unfinished nuclear facility in Syria.

In Iran, multiple atomic installations are scattered throughout the country, some underground or bored into mountains – unlike the Iraqi and Syrian installations, which were single aboveground complexes.Still, the Syria action seemed to indicate that Israel would also be willing to use force preemptively against Iran.”For Israel this is not a target that cannot be achieved,” said Maj. Gen. Aharon Zeevi-Farkash, former head of Israel’s army intelligence.

However, it’s unlikely Israel would carry out an attack without approval from the United States.

Recent signs that Washington may be moving away from a military option – including a proposal to open a low-level U.S. diplomatic office in Tehran and a recent decision to allow a senior U.S. diplomat to participate alongside Iran in international talks in Geneva – are not sitting very well with Israel.

That may help explain recent visits to Jerusalem by Mike McConnell, the U.S. director of national intelligence, and Adm. Michael Mullen, chairman of the Joint Chiefs of Staff, each of whom delivered a message to Israel that it does not have a green light to attack Iran at this time.

Senior Israeli officials, speaking on condition of anonymity because they do not wish to appear at odds with their most important ally, said they were concerned about a possible softening of the U.S. stance toward Iran.

Apparently to allay Israeli concerns, Bush administration officials last week assured visiting Israeli Defense Minister Ehud Barak that the U.S. has not ruled out the possibility of a military strike on Iran. And the U.S., aware of Israel’s high anxiety over Iran’s nukes, is also hooking Israel up to an advanced missile detection system known as X-Band to guard against any future attack by Iran, said a senior U.S. defense official, who spoke on condition of anonymity because the discussions over the issue have not been made public.

With sanctions and diplomacy still the international community’s preferred method to get Iran to stop building the bomb, an Israeli strike does not appear imminent.

If it did attack, however, Israel would have to contend with upgraded Iranian defense capabilities, including 29 new Tor-M1 surface-to-air missile systems Iran purchased from Russia last year in a $700 million deal.

Russia has so far not gone through with a proposed sale to Iran of S-300 surface-to-air missiles, an even more powerful air defense system than the Tor-M1. An Israeli defense official said the deal is still on the table, however. This is a big source of consternation for Israel because the system could significantly complicate a pre-emptive Israeli assault on Iran.

Military experts say an Israeli strike would require manned aircraft to bombard multiple targets and heavy precision bombs that can blast through underground bunkers – something Israel failed to do in its 2006 war against Hezbollah. It’s widely assumed that Israel is seeking to obtain bunker buster bombs, if it hasn’t already done so.

Elite ground troops could also be necessary to penetrate the most difficult sites, though Israeli military planners say they see that option as perhaps too risky.

America’s ability to take out Iran’s nuclear facilities is far superior to Israel’s.

Unlike Israel, the United States has cruise missiles that can deliver high-explosive bombs to precise locations and B-2 bombers capable of dropping 85 500-pound bombs in a single run.

Yet the cost of an attack – by the U.S., Israel or both – is likely to be enormous.

Iran could halt oil production and shut down tanker traffic in the strategic Strait of Hormuz, which could send the price of crude skyrocketing and wreck Western economies.

It could stir up trouble for the U.S. in Iraq by revving up Shiite militias there just as Washington is showing some important gains in reining in Iraqi chaos.

It could activate its militant proxies in both Lebanon and the Gaza Strip, from where Israel could come under heavy rocket attack. And it could strike Israel with its arsenal of Shahab-3 long-range missiles – something Israel is hoping to guard against through its Arrow missile defense system.

Perhaps most importantly, any strike on Iran – especially if it’s done without having exhausted all diplomatic channels – could have the opposite of the desired effect, “actually increasing the nationalist fervor to build a nuclear weapon,” said Meir Javedanfar, an Iranian-born Israeli and expert on Iranian affairs.

Whether an attack on Iran would be worth its cost would depend on how long the nuclear program could be delayed, said Chuck Freilich, a former Israeli deputy national security adviser and now a senior fellow at the Harvard Kennedy School.

Related articles:
– Pentagon Warns Against Israeli Attack on Iran
– The war between the United States and Iran is on
– Cheney considered a ‘False Flag Attack’ to start war with Iran
– EU agrees to go beyond U.N. sanctions on Iran
– More than 100 countries back Iran’s nuclear program
– Obama reportedly told Democrats Israel will hit Iran if sanctions fail
– Scott Ritter: Iran Shows Its Cards
– President George W Bush backs Israeli plan for strike on Iran
– Iran does not intend to wipe out Israel, says Ahmadinejad
– Ron Paul: Iranians Tested Missiles AFTER Israel had WAR GAMES
– How Israel Is creating the war on Iran
– Ron Paul: Nancy Pelosi pulled Iran bill on orders of Israel
– Ex-weapons inspector says Iran not pursuing nukes, but U.S. will attack before ‘09
– Senate report exposes key role of the Israel lobby in fomenting war with Iran
– Ron Paul: I hear members of Congress saying “if we could only nuke Iran”