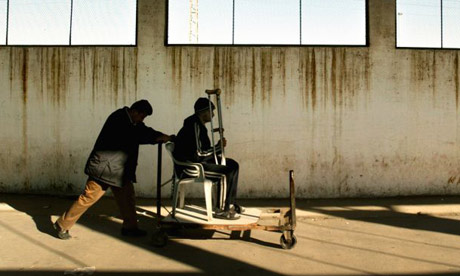 A porter pushes a 15-year-old Palestinian cancer patient through the Erez crossing between the Gaza Strip and Israel Photograph: Goran Tomasevic

Israel’s secret police are pressuring Palestinians in Gaza to spy on their community in exchange for urgent medical treatment, according to a report released today by an Israeli human rights organisation.

Physicians for Human Rights says the Shin Bet began interrogating Palestinian patients seeking permission to travel from Gaza to Israel for crucial medical help after Israel blockaded and then declared the tiny territory an enemy entity more than a year ago.

Typically, patients are taken to a small, windowless room, underground, beneath the security terminal at Erez, the only passenger crossing that remains open between Gaza and Israel, where they are questioned by Shin Bet agents for hours, the report says.

Refusal to cooperate often results in the denial of medical treatment. Based on the testimonies of more than 30 Palestinians – 11 of which are published – the report says the Shin Bet is using coercion and extortion to force patients to collaborate.

“They took me through underground passages and made me sit in another waiting room for almost 45 minutes. A man approached me and called me to another room for interrogation. He asked me to sit down and presented himself as Moshe,” Bassam al-Wahidi, a Fatah-aligned journalist, said in his affidavit to Physicians for Human Rights.

“After all my responses he said to me: ‘I want to talk to you openly when you return from Israel so that you will have an acceptable reputation on the Israeli side. Either you make contact with me and agree to my demands, or you will not get any medical treatment which will cause you to be blind and you will become a burden to your family and friends,'” Wahidi said in his affidavit.

But he said he refused and was forced to return to Gaza without receiving any treatment. Now the 28-year-old, who married a year and a half ago, is completely blind in his right eye and losing the vision in his overstrained left eye.

“I might divorce because I can’t stand in front of my wife as a disabled person,” Wahidi said .

He is one of an unknown number of patients from Gaza who have been denied medical treatment after refusing to inform on their friends, neighbours and relatives. Many patients feel they are being forced to choose between preserving their life or protecting their community. Physicians for Human Rights says such pressure amounts to coercion and extortion.

International law forbids the use of civilians in conflict to damage an enemy state and collaboration in the Palestinian community is a crime punishable by death.

“The patient knows that refusal to respond to the interrogator’s questions and demands will ruin his chances to access medical treatment,” the report says. While some patients are turned back after they refuse to collaborate, others arrive at the security interview only to be detained and locked in jail, it says.

Applications for help in Israel jumped sharply with Israel’s blockade on Gaza.

Israel’s security services insists that patients are denied entry only on security grounds. It also says that holding Israel responsible for the health of Palestinians in Gaza is “wholly inappropriate and misleading”, arguing that it no longer occupies the coastal territory, having withdrawn its troops and settlers from the area in 2005.

However, in a letter to Physicians for Human Rights in June, Colonel Shlomi Muchtar said: “The state’s obligations are derived, among other things, from the rules of war and from the scope of its control over border crossings between it and the Gaza Strip.”