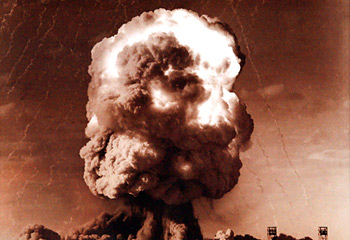 About 800 former servicemen from Britain, New Zealand and Fiji earlier this year launched a multi-million dollar lawsuit against the MoD, claiming they had been exposed to dangerous levels of radiation during tests at sites including Maralinga in South Australia and Christmas Island.

While the case is not due to start until January, court documents seen by the newspaper show that two British Royal Air Force servicemen Eric Denson and John Brothers were irradiated after being ordered to fly through mushroom clouds of nuclear bombs to collect samples.

Film badges worn by the men recorded the amount of radiation they were exposed to.

“Eric had a dose equivalent to 190 years of background radiation,” the newspaper said.

Mr Denson’s widow Shirley Denson, who is part of the group suing the MoD, said she hoped the truth about the tests would finally be revealed.

“Hopefully this will mean they have to admit everything else,” she told the newspaper.

“There were 20,000 others there. They and their families suffered just as badly.

“In reality they have no idea who had how much dose. Eric and John had records taken but most had none. Those who had film badges for the explosions were made to hand them in and they were never labelled to show who was wearing them.”

Earlier this year, Australian nuclear test veterans said they would monitor the mass compensation claim in Britain as they prepare to launch their own class action against the Federal Government.

In June, the Federal Government announced it would provide free cancer tests and treatment to about 100 Australian police who patrolled the British nuclear test site at Maralinga up to 1988.

Only about 450 of the test veterans are still alive and many claim to have suffered serious illness, including cancer, as a result of exposure to radiation during the 1950s tests.