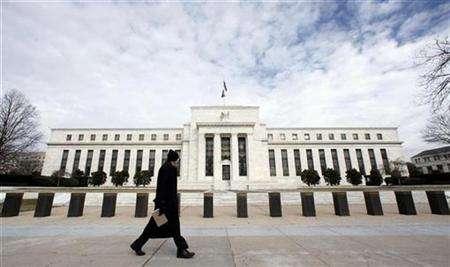 NEW YORK (Reuters) – Banks borrowed a record amount of funds from the Federal Reserve in the latest week as the year old credit crisis took a persistent toll, while the commercial paper market continued to contract, signaling tough conditions for short term borrowers.

Banks’ primary credit borrowings averaged $17.45 billion per day in the latest week, the second straight week this had hit a record and up from $16.38 billion the previous week, Fed data showed on Thursday.

“It shows there’s a shortage of liquidity in the system,” said Christopher Low, chief economist at FTN Financial in New York.

Secondary credit the Fed extended, which is usually taken out by banks in need of emergency cash, rose to $89 million in the latest week, from $34 million the week before. Although these numbers are still very small compared with primary credit, “What that tells you is that there’s an increasing number of banks that the Fed is classifying as ‘unsound’ or inadequately capitalized,” Low said.

Analysts may watch the trend of secondary credit closely, given the travails of U.S. regional and smaller banks and the likelihood that a continued decline in house prices and rise in foreclosures and bad loans will deepen the difficulties of the banking sector for many months or years.

Some analysts ascribed the overall rise in demand to use the Fed’s short term discount window borrowing facilities to a mix of factors.

“I am sure there are troubled banks trying to tap the window,” said Michael Feroli, U.S. economist with JPMorgan in New York. But he added: “more and more banks are trying to take advantage of the pure economic advantage of borrowing at a cheap rate and you are seeing a gradual fading away of the stigma of using the discount window.”

Meanwhile, the U.S. commercial paper market, a vital source of short-term funding for daily operations at many companies, fell $16.0 billion to $1.728 trillion, the lowest level outstanding in two years, from $1.744 trillion the previous week, Federal Reserve data showed on Thursday.

“The panic of last year is over. It’s more orderly now, but the financial stresses remain and there will be more difficulties to come,” said John Canavan, market analyst at research company Stone & McCarthy in Princeton, New Jersey.

Part of the overall decline was attributable to asset-backed commercial paper, a subsector that has been eroded by the slide of housing and mortgage-related securities.

“The asset-backed outstanding continues to creep a little lower,” Canavan said. “No one is willing to touch the asset-backed commercial paper because people are concerned about the intrinsic value of the underlying issues, mortgage-related securities.”

Foreign central banks, who own over a quarter of marketable Treasuries, were net buyers of U.S. government bonds in the latest week, but were net sellers of agency securities, Federal Reserve data showed on Thursday.

The interbank cost of borrowing three-month dollar funds posted its biggest fall in a month on Thursday, according to the British Bankers’ Association, a day after central banks announced more liquidity boosting measures.

U.S. primary dealers borrowed a modest $3 million from the U.S. central bank’s Primary Dealer Credit Facility in the latest week, versus an average of zero per day the week before.

Dealers took $28.1 billion in Treasuries of the $50 billion the Federal Reserve offered at its weekly Term Securities Lending Facility auction on Thursday, not covering the total amount on offer, but still a sign of hefty demand.

Cash strapped financial institutions can convert the Treasuries temporarily into short term cash loans in the repurchase market in order to shore up balance sheets depleted by the credit crisis.