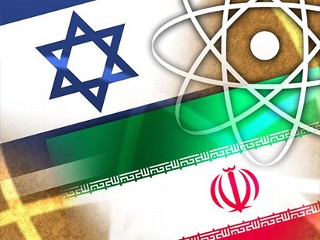 Joint Chiefs of Staff Chairman Adm. Mike Mullen, who was in Israel over the weekend, issued a strong warning today about the dangers of a military attack on Iran.

At a Pentagon press conference, Mullen was asked, “How concerned are you … that Israel may undertake a unilateral strike against Iran by the end of the year?”

“My strong preference, here, is to handle all of this diplomatically with the other powers of governments, ours and many others, as opposed to any kind of strike occurring,” he answered. “This is a very unstable part of the world. And I don’t need it to be more unstable.”

Mullen refused to talk specifically about what was said in his talks with the Israelis, but he made it clear wants to avoid military confrontation.

“I’ve been pretty clear before that from the United States’ perspective, the United States’ military perspective in particular, that opening up a third front right now would be extremely stressful on us,” he said. “That doesn’t mean we don’t have capacity or reserve. But that would really be very challenging and also the consequences of that sometimes are very difficult to predict.”

Mullen said there needs to be better “dialogue” on the Iranian nuclear issue. Asked what he meant, Mullen responded, “When I talk about dialogue — actually, I would say very broadly across the entirety of our government and their government.

“But, specifically, that would be — need to be led, obviously, politically and diplomatically,” he said. “And if it then resulted in military-to-military dialogue, I think that part of it certainly could add to a better understanding of each other.

“We haven’t had much of a dialogue with the Iranians for a long time,” Mullen said. “It takes two people to want to have a dialogue, not just the desire on one part.”

Mullen’s views here seem to be at odds with the Bush administration’s policy, which is that there will be no direct dialogue between the United States and Iran on the nuclear issue unless Iran agrees to suspend its nuclear program.

President Bush today said all options remain on the table against Iran but emphasized the need for a diplomatic solution. 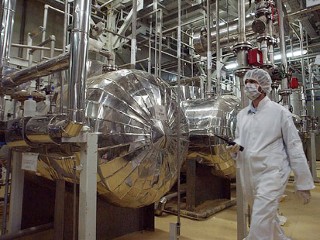 Wearing protective clothes, an Iranian security person walks at a part of the Uranium Conversion Facility, just outside the city of Isfahan, 410 kilometers south of the capital Tehran, Iran, March 30, 2005. (Vahid Salemi/AP Photo)

“I have made it very clear to all parties that the first option ought to be to solve this problem diplomatically,” Bush said at the White House. “And the best way to solve it diplomatically is for the United States to work with other nations to send a focused message, and that is, that you will be isolated and you will have economic hardship if you continue trying to enrich [uranium, the first step toward making nuclear weapons].”

Iran’s foreign minister today dismissed talk of a U.S. or Israeli attack against his country, calling the prospect of another war in the Middle East “craziness.”

“In Iran we must defend our national security, our country and our revolutionary system, and we will continue to do so,” Manouchehr Mottaki said.

Mottaki said in an interview with The Associated Press that he does not believe Israel or the United States would act while the U.S. economy is suffering and the United States is bogged down in wars in Afghanistan and Iraq.

His comments came after Iran’s oil minister, Gholam Hossein Nozari, warned that an attack on his country would provoke a fierce response “that nobody can imagine” but would not disrupt oil supplies.

Tehran “is not going to be quiet” if attacked, Nozari said.

ABC News’ Martha Raddatz and files from the AP contributed to this report.

1 thought on “Pentagon Warns Against Israeli Attack on Iran”