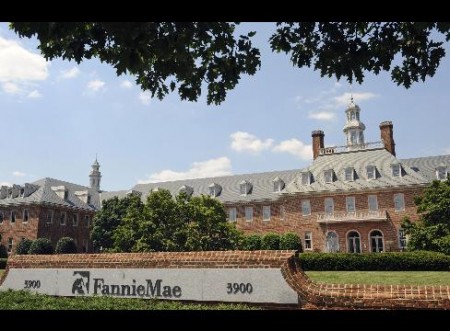 July 23 (Bloomberg) — Fannie Mae, the largest U.S. mortgage finance company, couldn’t find a buyer who would pay $6,900 for the three-bedroom house at 1916 Prospect St. in Flint, Michigan. So broker Raymond Megie, who is handling the foreclosure sale, advised cutting the price to $5,000.

Fannie Mae acquired twice as many homes through foreclosure in the first quarter as it sold, regulatory filings show. Unsold properties may weigh on the company’s stock, which lost almost half its value since June 5, said Moshe Orenbuch, managing director of equity research at Credit Suisse Group AG in New York. Late payments on the company’s home loans, a harbinger of foreclosures, almost doubled in the past year.

Together, Fannie Mae and Freddie Mac, the two biggest U.S. mortgage finance companies, owned a record $6.9 billion of foreclosed homes on March 31, compared with $8.56 billion held by all 8,500 U.S. commercial banks and savings and loans. Foreclosed houses sell at an average discount of about 20 percent, according to economists Ethan Harris and Michelle Meyer at New York-based Lehman Brothers Holdings Inc. At that rate, the two mortgage companies stand to lose $1.39 billion on the foreclosed houses they currently own.

“Progress on this is probably one of, if not the single most important economic process right now,” Orenbuch said. “With prices decreasing, it’s better to get rid of houses quickly.”

Orenbuch, whose Fannie Mae recommendations would have yielded a 65 percent return to investors who followed them over the last year, the highest of any stock analyst tracked by Bloomberg, said the Washington-based company will sink to $10 share. That’s 25 percent lower than its $13.41 New York Stock Exchange composite price yesterday.

The value of Fannie Mae’s foreclosed property doubled in the first quarter to $4.72 billion from $2.4 billion a year earlier, and the number of homes it owned climbed 64 percent to 43,167, according to a regulatory filing. The amount the company sold was $952 million, compared with $706 million a year earlier.

“It’s a no-win for the housing market,” said Ron Peltier, chief executive officer of Berkshire Hathaway Inc.’s HomeServices of America Inc., the second-largest U.S. residential real estate brokerage. “Where there are pockets of distressed real estate, it does have an adverse effect on the surrounding properties.”

Fannie Mae’s goal in selling its properties is to get the highest possible price, even if it means hanging on to them longer, said Gabrielle Harrison, the company’s vice president for REO sales. REO stands for “real estate-owned,” a designation for properties that have been repossessed by creditors. Getting the highest price helps preserve neighborhood property values, she said.

“We want to treat that home as if it was your own, or as if you were living next door to it,” Harrison said. “You wouldn’t want that home to bring down your property value.”

The typical price Fannie Mae received for foreclosed homes sold in the first quarter fell to 74 percent of the unpaid mortgage principal from 93 percent in 2005, according to Harrison.

Harrison declined in an interview to say how long it takes to sell the average foreclosed home or estimate how many more Fannie Mae may acquire through foreclosure in the coming months.

The number of borrowers whose payments were late by 90 days or more rose to 1.15 percent in the first quarter from 0.62 percent a year earlier, according to Fannie Mae regulatory filings.

Freddie Mac fell to its lowest valuation in 13 years and Fannie Mae to its lowest in 16 years in New York Stock Exchange composite trading on July 7 after Lehman Brothers analysts said in a report that an accounting change may force them to raise a combined $75 billion.

The companies plunged another 35 percent during the next four trading days, prompting the Federal Reserve to authorize lending to them directly. On July 13, a Sunday, Treasury Secretary Henry Paulson said he would ask Congress for authority to buy unlimited stakes in the two mortgage companies.

Analysts estimate Fannie Mae will report a net loss this year of about $3.8 billion on an adjusted basis and Freddie Mac‘s losses will total more than $1.4 billion, according to surveys by Bloomberg.

Fannie Mae, founded as part of President Franklin D. Roosevelt‘s plan to resuscitate the U.S. economy in 1938, and Freddie Mac, started in 1970, were chartered by Congress. They bundle home loans into securities to sell to investors and use cash from the sales to fund mortgage lenders. Together, Fannie Mae and Freddie Mac own or guarantee about half of the $12 trillion of mortgages in the U.S.

Securitization of residential mortgages by underwriters outside of Fannie Mae and Freddie Mac has almost stopped. Banks bundled $1.15 trillion of home loans into so-called private-label securities in 2006, Inside Mortgage Finance reported. The number fell to $46 billion in the first half of 2008, according to the Bethesda, Maryland-based industry publication.

The two government-sponsored enterprises own or guarantee 81 percent of U.S. mortgages originated this year, data compiled by the Washington-based Office of Federal Housing Enterprise Oversight show.

The home on Prospect Street in Flint needs a new roof and carpeting and the plumbing has been ripped out, said Megie, a broker with Realty Executive Main Street LLC in Lapeer, Michigan, who sells Fannie Mae-owned homes. The house was originally listed for sale in April, he said.

“Two years ago I didn’t have any Fannie Mae properties and now it’s probably pushing 50 percent of what I have listed,” Megie said. Fannie Mae is fixing vandalized homes instead of “just dumping them to investors,” he said.

Bruce Norris, a builder and real estate investor in Riverside, California, estimates about 15 percent of foreclosed houses have been intentionally damaged.

“Banks can’t fix all the homes because they just have too many,” said Norris, president of Norris Group, referring to all owners of repossessed homes and not specifically to the government-sponsored enterprises.

The longer it takes to sell a house, the lower the profit will be, said Dean C. Williams, chief executive officer of Williams & Williams Worldwide Real Estate Auction in Tulsa, Oklahoma. It costs creditors such as Fannie Mae 2 percent of the value of the property every month in taxes, insurance, utilities, lost revenue, maintenance, management and cleanup after vandalism, Williams estimates.

Fannie Mae owns or guarantees $51.2 billion of subprime loans, those given to borrowers with bad credit histories, a category that makes up about 2 percent of its total mortgage holdings, according to the company’s Web site. Subprime mortgages default at five times the rate of prime mortgages, according to the Mortgage Bankers Association in Washington.

Fannie Mae also owned or guaranteed $344.6 billion of Alt-A mortgages, which are granted without full documentation of a borrower’s income. Those loans represent about 13 percent of the company’s holdings.

Less than 1 percent of its loans, or $20.6 billion, are payment-option adjustable-rate mortgages that let borrowers pay less than they owe each month, with the unpaid balance added to the principal.

Freddie Mac’s inventory of foreclosed homes also is rising. The value of single-family properties that McLean, Virginia-based Freddie Mac held in the first quarter rose to $2.2 billion from $871 million a year earlier, according to a regulatory filing. The company acquired 9,939 homes in the quarter, sold 5,914 and owned 18,419 properties at the end of March.

Freddie Mac’s real estate is managed and sold by a network of 1,800 brokers coordinated by its HomeSteps division in Carrollton, Texas, according to spokesman Brad German. HomeSteps spends an average of $5,000 on repairs to each house, German said.

Freddie Mac-owned properties spend an average of 152 days on the market and typically sell for 92 percent of the listed price, usually about 30 percent less than the peak prices of 2006, said Ingrid Beckles, vice president of servicing and asset management. The company re-evaluates prices every two weeks, she said.

“We are very careful to ensure our properties are not driving market values down and they show well,” Beckles said. “Our challenge is like everyone else’s from a volume perspective: maximize recovery and minimize credit losses, and balance that with making sure we’re not driving down property values and not destabilizing neighborhoods.”

Part of the difficulty for all owners of foreclosed property, and not just Fannie Mae, is a shortage of qualified agents in the field who can sell the homes efficiently, said Jesse Ramirez, a broker associate at Re/Max Partners Real Estate in Corona, California.

“They are all recent college grads without experience,” Ramirez said. “They have 300 files each and they’re overwhelmed. They don’t understand how the typical transaction goes. These people didn’t have jobs two years ago, not doing this.”