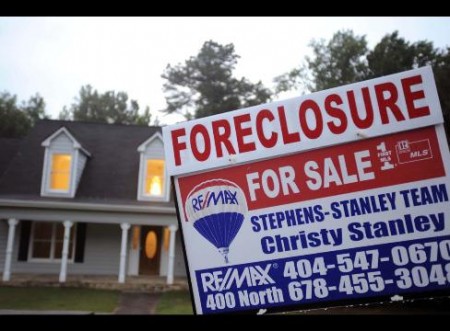 July 25 (Bloomberg) — U.S. foreclosure filings more than doubled in the second quarter from a year earlier as falling home prices left borrowers owing more on mortgages than their properties were worth.

One in every 171 households was foreclosed on, received a default notice or was warned of a pending auction. That was an increase of 121 percent from a year earlier and 14 percent from the first quarter, RealtyTrac Inc. said today in a statement. Almost 740,000 properties were in some stage of foreclosure, the most since the Irvine, California-based data company began reporting in January 2005.

“Rising foreclosures are putting downward pressure on prices, increasing the possibility that homeowners will go upside- down on their mortgages,” said Sheryl King, chief U.S. economist at Merrill Lynch & Co. in New York. “That will cause more losses in mortgage portfolios and less willingness from investors to securitize mortgages and therefore fewer mortgages.”

About 25 million U.S. homeowners risk owing more than the value of their homes, according to Bill Gross, manager of the world’s biggest bond fund at Pacific Investment Management Co. That would make it impossible for them to negotiate better loan terms or sell their property without contributing cash to the transaction.

The Commerce Department today reported that new home sales fell less than expected, and a Standard and Poor’s measure of homebuilder stocks rose as much as 6.1 percent.

Sales of new homes fell 0.6 percent to a 530,000 pace from 533,000 in May, a reading higher than previously estimated, the Commerce Department said in Washington. The number of properties on the market dropped by the most in four decades, today’s report showed, indicating builders are making some headway in clearing out inventories.

Economists had forecast sales would decline to a 503,000 pace, from a previously reported 512,000 for May, according to the median of 75 projections in a Bloomberg News survey. Estimates ranged from 480,000 to 530,000. The Standard and Poor’s Supercomposite Homebuilding Index rose 4.2 percent at 11:14 am, lowering its loss for the past 12 months to 42 percent. Pulte Homes Inc., a builder based in Bloomfield Hills, Michigan, was the biggest gainer, climbing 80 cents, or 7.3 percent, to $11.83 at 11:16 a.m. in New York Stock Exchange composite trading. The shares have lost 43 percent of their value in the past 12 months.

Falling home values, led by states such as Nevada and California that have the biggest default rate, have prompted RealtyTrac to almost double the projected number of foreclosures this year to about 2.5 million, said Rick Sharga, executive vice president for marketing.

“The big variable here is what effect the housing bill now being considered by the Senate is going to have on foreclosure activity in general,” Sharga said in an interview. “Based on market conditions themselves, we are nowhere near the end of this trip. Best-case scenario, we’re looking at another year of this.”

The housing bill aims to help 400,000 Americans with subprime home loans refinance into 30-year, fixed-rate mortgages backed by the government. The measure passed the House of Representatives and President George W. Bush has said he would sign it.

Subprime mortgages were available to borrowers with bad or incomplete credit histories and default at five times the rate of prime mortgages, according to the Mortgage Bankers Association in Washington.

Bank seizures in the first half of the year increased by 154 percent to 370,179 from the same period in 2007, RealtyTrac said. Last year’s second-quarter data on bank repossessions was not available, according to RealtyTrac.

Forty-eight of 50 states and 95 of the 100 largest U.S. metropolitan areas had year-over-year increases in foreclosure filings in the second quarter, RealtyTrac said.

Nevada was the state with the highest rate. One in every 43 households received a foreclosure notice in the quarter, four times the national average and an increase of 147 percent from a year earlier, according to RealtyTrac.

Foreclosure filings tripled in California, where one in every 65 households was affected, the second-highest rate among states. Arizona had the third-highest rate, with one every 70 households, a more than threefold increase from the second quarter of 2007, RealtyTrac said.

Lenders will cut in half the number of mortgages to purchase homes in 2008 compared with two years ago, said Guy Cecala, publisher of the Bethesda, Maryland-based trade publication Inside Mortgage Finance.

Bank repossessions, or REOs — meaning “real estate-owned” — accounted for 30 percent of total foreclosure activity in the second quarter, up from 24 percent of the total in the first quarter, RealtyTrac said.

Foreclosures push all home values down by an estimated 6 percent, and will contribute to national prices declining another 15 percent by the end of 2009, Ethan Harris and Michelle Meyer, Lehman Brothers Holdings Inc. economists in New York, said in a report yesterday.

Seven of the 11 metropolitan areas with the highest rates of foreclosure filings in the second quarter were in California, according to RealtyTrac. The Stockton area, in California’s Central Valley, had the highest incidence, with one in 25 households receiving filings.

In Riverside-San Bernardino, known as the Inland Empire, where the California Association of Realtors said home prices plummeted 35 percent in May compared with a year earlier, one in 32 households entered foreclosure, according to RealtyTrac.

Bakersfield, Sacramento, Oakland, Fresno and San Diego were the other California metro areas in the top 11.

The Las Vegas area, where home values fell 27 percent in May compared with a year earlier, according to the S&P/Case-Shiller Home Price Index, had the third-highest foreclosure rate, with one in every 35 households, RealtyTrac said.

Fort Lauderdale, Florida, Phoenix and Miami were the other metropolitan areas in RealtyTrac’s top 11.

New York filings increased 62 percent from a year earlier to 16,025, with one in every 493 households in a stage of foreclosure, the 30th-highest rate.

New Jersey filings rose 140 percent. One in every 201 households in the state received notice, the 12th-highest rate in the U.S.

To contact the reporter on this story: Bob Ivry in New York at bivry@bloomberg.net.