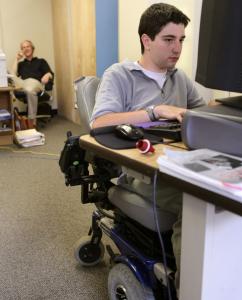 Massachusetts, which earlier this decade had the lowest percentage of eligible residents using food stamps, now has the fastest-growing food-stamp program in the country, a dramatic turnaround that state officials attribute to soaring food prices and a simplified application process.

As food and fuel costs continue to rise, the officials say, people who would not normally use food stamps are turning to the federal program to make ends meet.

“I think low-income families are faced and will be faced this winter with the difficult choice of eating or heating a home,” said Patricia Baker, senior policy analyst for the Massachusetts Law Reform Institute, a nonprofit organization that advocates for the poor. “We’re seeing prices escalating, and anything that a family can access to help them buy basic food for their families is critical.”

More than 500,000 people statewide received food stamps in April, a 67-percent increase from 2003 and 11 percent more than last year, according to state records.

Food-stamp participation increased across the country between 2003 and 2008, with the exception of Hawaii and Wyoming. In New England, New Hampshire saw the next-fastest growth, with a 41-percent rise from five years ago, and Rhode Island saw the smallest change, with a 13-percent increase over that period.

In Massachusetts, residents received about $48 million in food stamp benefits in April 2008, more than double the $22 million they received in April 2003. The figures reflect a drastic change for the state, which had the lowest food stamp participation in the country from 2000 to 2002.

“Certainly the economy, the lack of jobs – people not being able to buy food and needing help – that’s a significantly contributing factor,” Baker said. But changes in state application procedures, including a simplified online form, are also making the program more accessible, she said.

The online applications made available in November, combined with the state’s eight new satellite offices, help working families and disabled people who might have difficulty going into state offices for interviews and paperwork, officials say. Four of the new centers – in Boston, Lynn, Chelsea, and Fall River – are dedicated solely to food stamps. The state is also waiving the need for face-to-face interviews more frequently for working families and the disabled.

In June, the state changed its asset requirements for recipients and no longer considers bank accounts, retirement accounts, or property ownership when determining eligibility.

Sam Longnecker, a 23-year-old man with a degenerative nerve disorder that requires him to use a wheelchair, is among those who have benefited from the new application process. He applied online in March with the help of a fellow volunteer at the Center for Law and Education in Boston and had the in-person interview waived.

Longnecker, who gets a stipend for the work he does at the center, said he would not have been able to afford food and rent for his handicap-accessible apartment in Boston without the food assistance.

“Even with the money I got from the job and the money I get through Social Security, I wouldn’t have enough to live in Boston,” he said in a phone interview. “It’s made quite a difference for me.”

Typically, a family of four that includes children under 19 must make less than $42,408 annually to qualify for food stamps. In April, Massachusetts households enrolled in the program receive an average of $181 a month, up from $158 in 2003.

Recipients get plastic cards that can be used at grocery stores like bankcards or credit cards. They are prohibited from using food stamps to buy alcohol, cigarettes, vitamins, medicines, pet foods, or cosmetics.

Local food banks have contributed to the increased enrollment by streamlining the application process for clients. The American Red Cross of Massachusetts Bay hired some part-time workers four years ago and recruited more translators to help people at their food pantries apply for food stamps.

Food banks had hoped that making food stamps available to more people who qualify would make them less dependent on food pantries. But food has become so expensive that stamps alone are not enough, activists say. The Food Research and Action Center, a nonprofit organization that monitors national food programs, says the maximum food stamp assistance for a family of four in May was $40 short of what the government estimates a family of four needs for a basic diet.

“The theory is that when people are using food stamps they have more sustenance coming in and the dependence on food banks is less,” said Catherine D’Amato, president of the Greater Boston Food Bank, which is also guiding people through the application. “But the increased cost in food and the increased cost in fuel is such that some people still need the food banks.”

Jonnelle Marte can be reached at jmarte@globe.com.