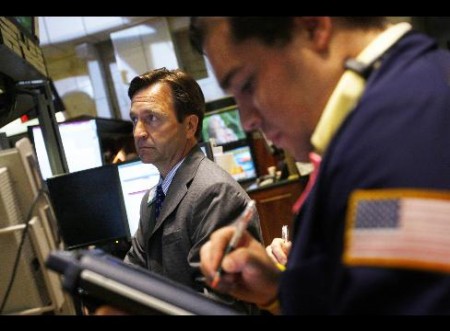 July 21 (Bloomberg) — Investors worldwide are betting more than $1 trillion on a collapse in stock prices.

Never Have So Many Short Sellers Made So Much Money

More than $1.4 trillion of equities worldwide are now on loan, about a third higher than at the start of 2007, data compiled by Spitalfields Advisors, the London-based firm specializing in securities lending, show. Almost all of that is being used to speculate that shares will fall, according to James Angel, a finance professor at Georgetown University who studies short selling. The global economic slowdown, $453 billion in bank losses and an explosion of funds that can profit from stock declines spurred the increase in short selling, helping send 22 of 23 countries in the MSCI World Index into bear markets.

“It’s a huge amount of money,” said Peter Hahn, a London- based research fellow for Cass Business School and a former managing director at Citigroup Inc. “Shorts have come a long way. They are getting into the mainstream, and long holders need to understand the shorts are not evil.”

While U.S. and U.K. regulators tighten rules on short sellers amid concern they’re accelerating more than $11 trillion in global stock losses this year, countries from Indonesia to India are opening up to the practice, which involves borrowing stock to sell it on the expectation it can be purchased at a lower price before paying back the loan.

Assets at so-called 130/30 and 120/20 funds, or those that are allowed to both hold stocks and short them, may climb to $2 trillion by 2010 from $140 billion in 2007, according to a study last year by Westborough, Massachusetts-based Tabb Group. Spitalfields estimates these funds may borrow an additional $600 billion by 2010.

Spitalfields was founded by Mark Faulkner and Bill Cuthbert in 2004 after careers in securities lending and investment banking at firms including New York-based Goldman Sachs Group Inc. and Frankfurt-based Deutsche Bank AG, respectively.

Short selling on the New York Stock Exchange rose to 4.6 percent of total shares last month, the highest since at least 1931, according to data compiled by Bespoke Investment Group LLC, the Harrison, New York-based firm that manages money for wealthy investors and provides financial research to institutions.

Short selling of Washington-based Fannie Mae and McLean, Virginia-based Freddie Mac, which own or guarantee about half of the $12 trillion of U.S. mortgages, surged before the shares plunged this month on concern they will require a bailout that would wipe out shareholders.

Even after a 90 percent rebound by Fannie Mae and a 75 percent surge by Freddie Mac in the final three days of trading last week, that would have left the shorts with a combined profit, excluding costs, of at least $1.4 billion from June 30 through July 15, the data show.

Survival of the Fittest

“Short sellers are a very important part of the ecosystem of our financial markets,” said Angel, a professor at Georgetown’s McDonough School of Business in Washington. “The same way that lions go after a herd, they go after the weaker animals. The shorts will pick on a company where there’s a legitimate controversy over its valuation.”

A slump in British banks helped spur the U.K. Financial Services Authority to impose rules on June 20 requiring firms to disclose short positions in companies that sell shares in rights offerings, when those positions exceed 0.25 percent of the company’s stock. The FSA cited short bets on June 13 for “severe volatility in the shares of companies conducting rights issues.”

Harbinger Capital, the New York-based hedge fund run by Philip Falcone, the former head of high-yield trading at Barclays Capital, disclosed a short position of 3.29 percent in HBOS as of June 20. Edinburgh-based HBOS has slumped 64 percent this year.

“The market is becoming a market for speculators rather than a market for investors,” said Roger Lawson, London-based director at the U.K. Shareholders’ Association. “These guys are making fat profits out of these market maneuvers. It should be restricted to a very limited level of market cap, otherwise it becomes market manipulation.”

The U.S. Securities and Exchange Commission last week limited so-called naked short sales of Fannie Mae, Freddie Mac and brokerages. In such a strategy, speculators sell shares they haven’t secured first. The decision comes amid an investigation of whether trading abuses contributed to the collapse of Bear Stearns Cos. in March.

“The SEC is trying to send a message — I am again not quite sure what the message is,” Chanos, a short seller and one of the first investors to raise questions about Enron Corp.’s accounting, said on Bloomberg Television from London. “I am just not sure that this was an issue at all for the equity prices of these companies.”

The SEC’s move “squeezed” some short sellers, forcing them to close positions they shorted earlier by buying the shares, Bespoke data show. Among Standard & Poor’s 1500 companies, those with the highest short interest gained the most, rising 15.1 percent on July 16 and July 17, according to the firm’s data.

While regulators in the U.K. and U.S. move to limit some types of shorting, the practice is increasing elsewhere. India’s capital markets watchdog said in December it would lift a six- year ban on short selling. Indonesia followed last month, allowing the practice for the first time.

In Brazil, equities on loan in June jumped 22 percent from a month earlier to a record $23.3 billion, according to the Brazilian Clearing and Depository Corp. Shorting increased after the Bovespa Index climbed to an all-time high on May 20.

To contact the reporter on this story: Alexis Xydias in London at at axydias@bloomberg.net.