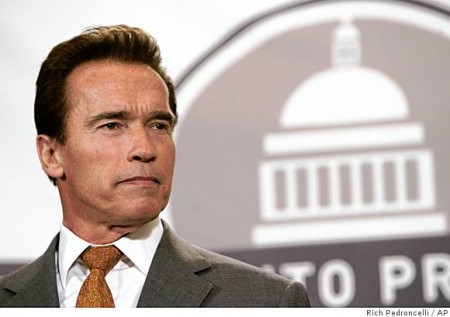 Gov. Arnold Schwarzenegger plans next week to slash the pay of more than 200,000 state workers to the federal minimum of $6.55 per hour to help ease the state’s budget crisis, according to a draft executive order obtained by The Chronicle on Wednesday.

The governor also will order an end to overtime pay for all but critical services, a freeze on state hiring and the immediate layoff of nearly 22,000 temporary, seasonal and student workers.

“As a result of the late state budget, there is a real and substantial risk that the state will have insufficient cash to pay for state expenditures,” the executive order states.

Schwarzenegger’s staff would neither confirm nor deny that the governor plans to issue the executive order, but sources said he could take action as early as Monday. The state, facing a projected $17.2 billion budget deficit for the fiscal year that began July 1, has not approved a budget.

“The governor is looking at a number of different options to ensure that the state does not run out of cash,” said Aaron McLear, a spokesman for the governor.

But administration officials, who asked to remain anonymous, said that about 200,000 of the state’s 245,000 workers, both hourly and salaried, will see their pay trimmed back to the federal minimum wage of $6.55 an hour, saving the state up to $1.2 billion a month. Dropping the temporary and short-time workers will save an additional $28.5 million each month.

While the layoffs could be made immediately, the pay cuts might not be completed until mid- or late August.

The proposed pay cut for hourly employees would take their wages well below the state minimum wage of $8 an hour. But a 2003 California Supreme Court decision allows the state to chop workers’ pay to the federal minimum when a state budget has not been enacted.

“While we’ve had late budgets in the past, the critical difference this year is cash,” an administration official said. “We have not had a situation in recent years that’s the same as the cash-starved situation that we may face in September if we don’t have a budget in place.”

While California needs to have about $2.5 billion in cash on hand at any given moment to cover the state’s ongoing expenses, the Golden State is projected to have just $1.8 billion at the end of September, the official said.

But the governor’s plan could face an immediate challenge from Democratic state Controller John Chiang, who will continue to pay state workers their full salaries, even in the face of Schwarzenegger’s executive order, said Hallye Jordan, a spokeswoman for the controller. The governor will have to take Chiang to court if he wants to stop him, she said.

“The controller hasn’t seen any executive order, but he would urge the governor to rethink his proposal,” she said. “This hasn’t been addressed by the courts and if it’s ruled illegal, it could cost the state a tremendous amount in damages.”

Chiang said the state has enough cash to make all payments, including the regular payroll, through September.

“Cutting workers’ salaries will do nothing meaningful to improve our cash position,” he said in a statement. The executive order is “nothing more than a poorly devised strategy to put pressure on the Legislature to enact a budget.”

The state has been without a budget for nearly a month.

Although Republicans and Democrats in the Legislature remain at odds over how to close the state’s anticipated budget deficit, Senate President Pro Tem Don Perata, D-Oakland, has called for a vote Tuesday on the Democrats’ budget proposal.

“The senator is committed to moving a budget to the governor’s desk so that it can be signed by Aug. 1, the date when the state will face more fiscal problems,” said Lynda Gledhill, a spokeswoman for Perata. “Unfortunately, the time frame is dictated by the state’s fiscal condition.”

While Perata had no comment on Schwarzenegger’s anticipated action, Republican leaders pledged to work to avoid any wage cuts.

“Republicans understand the urgency of getting the budget done as soon as possible, which is our main focus right now,” according to a joint statement issued by Assembly Minority Leader Mike Villines, R-Clovis (Fresno County) and Senate Minority Leader Dave Cogdill, R-Modesto. “We are working very hard to avoid drastic measures like the one that is being proposed.”

That is not likely to include reaching any agreement in time for Tuesday’s planned budget vote, however.

“The budget right now is not a result of any negotiations,” said Jennifer McDaniel, a spokeswoman for Villines. “The vote is just a drill.”

But Schwarzenegger’s planned pay cut for state employees is guaranteed to anger the workers and put even more pressure on Democrats and Republicans in the Legislature to quickly agree to a plan for closing the budget gap.

Some of the state’s lowest-paid workers will have to pay the price for the deadlock in the Legislature, labor officials said.

“We are the victims of the incompetence of the Legislature and Gov. Schwarzenegger,” said Jim Zamora, a spokesman for SEIU Local 1000, which represents 95,000 state workers. “Because they can’t sit down and pass a balanced budget, state workers must live in fear of having their wages slashed as much as 90 percent. We are not chess pieces, we are real people.”

Emily Clayton, policy coordinator for the California Labor Federation, added: “Holding state workers hostage is not a fair way to get to a budget agreement.”

Database: Find out how much state workers are getting paid at www.sfgate.com/ZDZE.

The problem: Today is Day 24 of the state budget impasse over California’s $17.2 billion budget shortfall. Gov. Arnold Schwarzenegger wants to help close the gap by borrowing against future state lottery sales, while Democrats and Republicans in the Legislature say the plan won’t fix this year’s budget woes.

Dispute: Democrats, who hold the majority in the Legislature, two weeks ago announced a $10 billion tax package, while Republicans said they will not support raising taxes.

What’s next: Senate President Pro Tem Don Perata, D-Oakland, has called a floor session for the Senate on Tuesday to vote on the budget even though a compromise is not within sight.