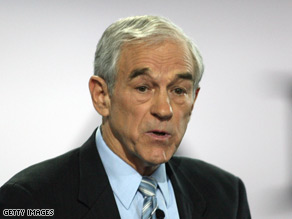 A plane carrying Ron Paul and six other congressmen made an emergency landing Tuesday.

(CNN) – A plane carrying Texas Rep. Ron Paul and six other members of Congress was forced to make an emergency landing Tuesday due to mechanical issues.

According to the Federal Avaiation Administration (FAA), Continental Airlines flight 458, a Boeing 737 en route to Washington, DC from Houston made a rapid decent in New Orleans when the pilot reported pressurization problems.

Reps. Ted Poe, Nick Lampson, and Henry Cuellar, Solomon P. Ortiz, John Carter, and Ciro Rodriguez were among those aboard the flight. The FAA says the plane had a safe landing in New Orleans with no injuries.

Update: Trevor Kincaid, a spokesman for Rep. Nick Lampson, tells CNN the congressmen are being rebooked on two different flights from New Orleans to Washington, D.C.

Kincaid said Lampson told him, “there was a minor technical failure with the pressure” and there was “a slow gradual descent, no nosedive.” Lampson told him in a phone conversation that, “some people didn’t realize there was a problem until the gas masks came down.” Lampson said there was no panic on the plane and praised Continental Airlines for their handling of the situation.