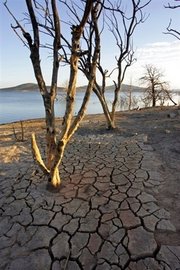 SYDNEY (AFP) – Up to a million people in Australia could face a shortage of drinking water if the country’s drought continues, a report on the state of the nation’s largest river system revealed Sunday.

The report said the situation was critical in the Murray-Darling system, which provides water to Australia’s “food bowl”, a vast expanse of land almost twice as big as France that runs down the continent’s east coast.

“We’ve had very low inflows, we’ve had a very dry June and the focus absolutely has to be critical human needs, that is the needs of the million-plus people who rely on the basin for drinking water.

“It just reminds us, yet again, the way in which this country, Australia, is particularly vulnerable to climate change.”

Australia is in the grip of the worst drought in a century, which has stretched for more than seven years in some areas and has forced restrictions on water usage in the country”s major cities.

The report said the Murray-Darling system, accounting for more than 40 percent of the gross value of Australia’s agricultural production, should provide enough drinking water for 2008-09.

But the report from senior federal and state government officials warned there could be problems supplying drinking water after that if rains did not come.

“If inflows are less and losses greater than expected, further contingency measures may be required to be implemented to secure critical human needs,” it said.

The Murray-Darling Basin, which stretches from Queensland in the north, through New South Wales to Victoria in the south and South Australia, is the country’s key food growing area.

A report by the nation’s top scientists this month said Australia was in for a tenfold increase in heat waves as climate change pushes temperatures up.

It found exceptionally hot years, which used to occur once every 22 years, would occur every one or two years, virtually making drought a permanent part of the Australian landscape.