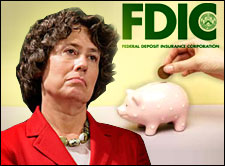 Indeed, on Friday afternoon FDIC Chairman Sheila Bair said in an interview on C-SPAN television that banks holding brokered deposits may be charged higher premiums in order to bring back the reserve to an acceptable size.

“I think that is something we need to factor into our premiums and charge higher premiums to banks that fit that profile,” she said in the interview, noting that the IndyMac failure was a big factor in the need for additional funds in the deposit insurance fund.

This means higher premiums for FDIC insured banks, analyst Ely noted, further complicating an already tenuous situation for the U.S. banking system. Banks will most likely pass the increased costs onto their customers, he said.

“Banks are going to pass it through to their customers through higher interest rates on loans, lower interest on deposit,” Ely predicted.

The FDIC has around $53 billion set aside to back up bank deposits up to $100,000 per depositor, one of the ways the organization is designed to ensure confidence in the banking industry. However, according to Ely, that $53 billion is “not really available.”

“The deposit insurance fund is as real as the social security trust fund,” Ely said, noting that only a “small fraction” of the $53 billion is actually available and “any losses beyond that will be assessed on the banks.”

(RTTNews) – The reserve, as of March 31, was valued at $52.843 billion, or 1.19 percent of the total insured deposits of $4.431 trillion. According to the Deposit Insurance Reform Act, the
FDIC must have at minimum 1.15 percent of all insured deposits in the fund, with a target rate of 1.25 percent.

The failure of IndyMac, which is estimated to cost the deposit fund at minimum $4 billion, brings the target below 1.15 percent, forcing the FDIC to adopt a restoration plan that will restore the Deposit fund to 1.15 percent within 5 years, according to the Reform Act.

“The $4 billion loss would drop the fund down to about 1.10 ratio,” Ely explained. “The FDIC is going to be obligated of an increase in premiums to pay for that loss, so the only monies that are available $2.843 billion in the fund, of that $50.966 billion was not available.”

Ely noted that any loss over $1.877 billion would have brought the ratio below 1.15 percent, meaning that losses are going to have to be assessed back to the banks.