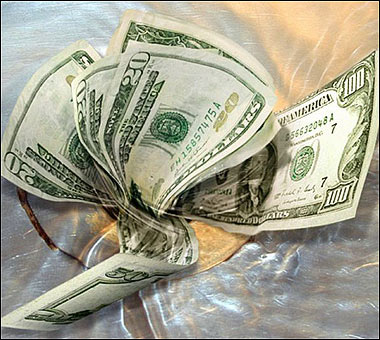 “It would be very difficult for the US to do this. Foreigners will not be willing to supply the capital. Nobody knows where the limit lies.”
Brian Bethune, chief financial economist at Global Insight, said the US Treasury had two or three days to put real money behind its rescue plan for Fannie and Freddie or face a dangerous crisis that could spiral out of control.

“This is not the time for policy-makers to underestimate, once again, the systemic risks to the financial system and the huge damage this would impose on the economy. Bold, aggressive action is needed, and needed now,” he said.

Mr Bethune said the Treasury would have to inject up $20bn in fresh capital. This in turn might draw in a further $20bn in private money. Funds on this scale would be enough to see the two agencies through any scenario short of a meltdown in the US prime property market.

He said concerns about “moral hazard” – stoked by hard-line free-marketeers at the White House and vocal parts of the US media – were holding up a solution. “We can’t dither. The markets can be brutal. We have to break the chain of contagion before confidence is destroyed.”

Fannie and Freddie – the world’s two biggest financial institutions – make up almost half the $12 trillion US mortgage industry. But that understates their vital importance at this juncture. They are now serving as lender of last resort to the housing market, providing 80pc of all new home loans.

Roughly $1.5 trillion of Fannie and Freddie AAA-rated debt – as well as other US “government-sponsored enterprises” – is now in foreign hands. The great unknown is whether foreign patience will snap as losses mount and the dollar slides.

But the lion’s share is held by the central banks of China, Russia and petro-powers. These countries could all too easily precipitate a run on the dollar in the current climate and bring the United States to its knees, should they decide that it is in their strategic interest to do so.

Mr Patelis said it was unlikely that any would want to trigger a fire-sale by dumping their holdings on the market. Instead, they will probably accumulate US and Anglo-Saxon debt at a slower rate. That alone will be enough to leave deficit countries struggling to plug the capital gap. “I don’t see how the current situation can continue beyond six months,” he said.

Merrill Lynch said foreign governments had added $241bn of US agency debt over the past year alone as their foreign reserves exploded, accounting for a third of total financing for the US current account deficit. (They now own $985bn in all.) By most estimates, China holds around $400bn, Russia $150bn and Saudi Arabia and other Gulf states at least $200bn.

Global inflation is now intruding with a vengeance as well. Much of Asia is having to raise rates aggressively, drawing capital away from North America. This may push up yields on US Treasuries and bonds, tightening the credit screw at a time when the US is already mired in slump.

Russia’s deputy finance minister, Dmitry Pankin, said the collapse in the share prices of Fannie and Freddie over the past week was irrelevant because their debt has been effectively guaranteed by the US government under the rescue package.

“We don’t see a reason to change anything because the rating of the debt of those agencies hasn’t changed,” he said.

Foreign policy experts doubt that the picture is so simple. Russia is likely to use its $530bn reserves as an implicit bargaining chip in high-stakes diplomacy, perhaps to discourage the US from extending Nato membership to the Ukraine and Georgia.

Vladimir Putin, now Russia’s premier, has stated repeatedly that his country is engaged in a new Cold War with the United States. It is clear that Moscow would relish any chance to humiliate the United States, provided the costs of doing so were not too high for Russia itself.

China is regarded as a more reliable partner, with a greater desire for global stability. Treasury Secretary Hank Paulson has intimate relations with the Chinese elite, dating from his days at Goldman Sachs when he visited the country over 70 times.

Brad Setser, from the US Council on Foreign Relations, said the Chinese have a stake in upholding Fannie and Freddie, not least to ensure that their loans are “honoured on time and in full”.

David Bloom, currency chief at HSBC, said fears that regional banks could start toppling after the Fed takeover of IndyMac last week were now the biggest threat to the dollar.

“We have a pure dollar sell-off,” he said. “It’s a hating competition: at the moment the markets hate the dollar more than they hate the euro, even though German’s ZEW confidence indicator was absolutely atrocious.”

The US Treasury is running out of time before foreign patience snaps, writes Ambrose Evans-Pritchard