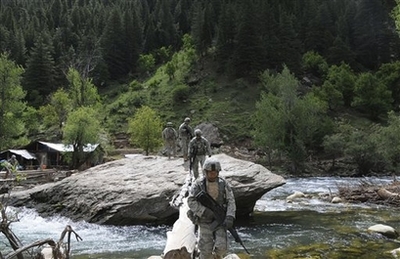 KABUL, Afghanistan – U.S. troops abandoned a remote outpost in eastern Afghanistan where militants killed nine of their comrades this week, officials said Wednesday, in another sign of the struggle facing foreign and Afghan security forces strung out along the mountainous border.

The violence is another indication of the growing strength of the Taliban-led insurgency, especially in Afghanistan’s east, where the outpost near the village of Wanat was breached by militants on Sunday. Nine Americans were killed in the deadliest incident for U.S. forces in three years.

On Tuesday, the insurgents drove out the handful of police left behind to defend government offices in the village, but 50 more officers were deployed Wednesday and soon regained control, senior provincial police official Ghoolam Farouq said.

The militants retreated into the mountains, and village elders negotiated a truce between the two sides, Farouq said.

NATO confirmed that the post, which lies amid precipitous mountains close to the Pakistan border, had been vacated while insisting that international and Afghan troops will “retain a strong presence in that area with patrolling and other means.”

In Washington, Pentagon leaders said Wednesday they are looking for ways to send additional troops to Afghanistan this year, signaling an acceleration in what had been plans to shift forces there no earlier than next year.

“I think that we are clearly working very hard to see if there are opportunities to send additional forces sooner rather than later,” Defense Secretary Robert Gates told Pentagon reporters. But, he added that no final decisions or recommendations have been made.

Adm. Mike Mullen, chairman of the Joint Chiefs of Staff, who recently returned from meetings with commanders in Afghanistan, said they clearly want more troops.

“It’s a tougher fight, it’s a more complex fight, and they need more troops to have the long-term impact that we all want to have there,” said Mullen, who also met last week with Pakistani leaders.

The Pentagon has been wrestling with how to provide what they say is a much needed military buildup in Afghanistan, while they still have 150,000 troops in Iraq.

The retreat from the eastern outpost will be considered a victory by the insurgents, and comes after a spate of security setbacks for President Hamid Karzai’s government, including a spectacular Taliban jail break in the southern Kandahar province in June that freed about 900 inmates, and a spike in attacks alongside the border with Pakistan.

In response, Karzai has stepped up his rhetoric against neighboring Pakistan, whose lawless tribal areas adjacent to Afghanistan serve as sanctuaries for al-Qaida and other militants.

Karzai blames the attacks – including suicide bombings and cross-border raids – on Pakistan’s intelligence service, alleging they are behind the insurgency in Afghanistan. Pakistan denies the charge saying Karzai is trying to create “an artificial crisis” to deflect attention from his own failings.

The accusations have pitched relations between these key U.S. allies to their lowest point since U.S. invasion of Afghanistan in 2001.

In other violence reported Wednesday, the U.S.-led coalition said eight civilians were killed when it called in airstrikes after one of its patrols came under attack in the country’s west. The issue of civilian casualties has caused friction between the Afghan government and U.S. and NATO troops, and has weakened the popularity of the Western-backed Karzai.

In a separate statement, the coalition said another airstrike killed several militants after they attacked a joint U.S. and Afghan patrol in Kandahar province’s Shah Wali district on Tuesday.

The governor of Kandahar said eight militants were killed during an operation in the southern province’s Khakrez district in the past two days. A regional Taliban commander, Mullah Mahmoud, who controlled about 250 fighters, was among those killed, a NATO statement said.