Senator John McCain, the Republican presidential candidate, has admitted that he never uses email and that his staff has to show him websites because he is only just “learning to get online myself”. 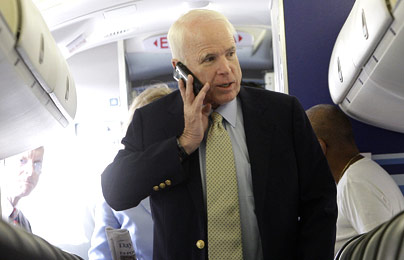 Mr McCain, who turns 72 this year, would be the oldest president ever to be first elected to the White House.

In facing Barack Obama, an opponent who is 25 years his junior and has made powerful use of the internet in his campaign, he is battling against claims he is stuck in the past.The former US Navy pilot, who spent more than five years as a prisoner of war after his jet was shot down over Vietnam, did himself no favours when asked by “The New York Times” which websites he looks at.

“Brooke and Mark show me Drudge, obviously, everybody watches, for better or for worse, Drudge,” he said, referring to his aides Brooke Buchanan and Mark Salter, who direct him to the Drudge Report website.

He added: “Sometimes I look at Politico. Sometimes RealPolitics, sometimes,” an apparent reference to the website RealClearPolitics.com.

At this point, Miss Buchanan and Mr McCain’s wife Cindy interjected that he also read his daughter Meghan’s blog.

“Excuse me, Meghan’s blog,” Mr McCain said, before remarking that he also read blogs by Adam Nagourney and Michael Cooper, the reporters interviewing him.

“And we also look at the blogs from Michael [Cooper] and from you [Mr Nagourney] that may not be in the newspaper, that are just part of your blog.”

When asked if he went online himself, the Arizona senator responded: “They go on for me. I am learning to get online myself, and I will have that down fairly soon, getting on myself.

“I don’t expect to be a great communicator, I don’t expect to set up my own blog, but I am becoming computer literate to the point where I can get the information that I need – including going to my daughter’s blog first, before anything else.”

After Mr McCain conceded that he did not use a BlackBerry or email, Mr Salter butted in to say: “He uses a BlackBerry, just ours.” Mr McCain said: “I use the Blackberry, but I don’t e-mail, I’ve never felt the particular need to e-mail.

“I read e-mails all the time, but the communications that I have with my friends and staff are oral and done with my cell phone. I have the luxury of being in contact with them literally all the time. We now have a phone on the plane that is usable on the plane, so I just never really felt a need to do it.

“And I understand that something appears on one blog, can ricochet all around and get into the evening news, the front page of The New York Times. So, I do pay attention to the blogs. And I am not in any way unappreciative of the impact that they have on entire campaigns and world opinion.”

Mr Obama always carries his BlackBerry with him and is often seen on his campaign plane tapping out emails. The internet has been central to his candidacy, allowing him to establish a network of grassroots activists and attract small donations.

Last month, Mark Soohoo, deputy director of Mr McCain’s e-campaign, was mocked for insisting: “You don’t necessarily have to use a computer to understand how it shapes the country.” He also stated: “John McCain is aware of the Internet. This is a man who has a very long history of understanding on a range of issues.”

Before he became president in 2001, George W. Bush would regularly send emails to both his father President George Bush Snr, now 84, and his mother Barbara Bush, now 83. Mr Bush’s online credentials took a hit in 2006, however, when he said that he had used “the Google” to pull up maps.

“It’s just amazing,” he told The Daily Telegraph. “It’s very hard to even think about someone who doesn’t know how to use the internet. It’s like, ‘Really?’ My five-year-old niece can use the internet. She knows how to go to nickelodeon.com and play her games.”

The interview could be politically damaging, he added. “The tough part is that if one of the concerns voters have is that you are out of touch with how they live, what they want, the problems they face, then this only reinforces that notion.

“He’s a hero for what he did 35 years ago, but that doesn’t necessarily make him the kind of president we want today. Here’s somebody who is in many ways very disconnected from where people are.”