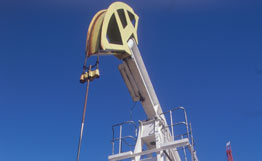 TEHRAN, July 13 (RIA Novosti) – A new large oil deposit with estimated reserves of more than 1 billion barrels of crude has been discovered in Iran, the Iranian oil minister said on Sunday.

Gholamhossein Nozari said the oil field, located in the southwestern province of Khuzestan, is believed to contain 1.1 billion barrels of crude, with recoverable reserves of about 220 million barrels.

Tehran exports the majority of crude produced in the country.

Iran grossed $70 billion from oil sales over the country’s past solar year, which according to the Iranian calendar ran from March 21, 2007 until March 20, 2008, the oil minister earlier said.