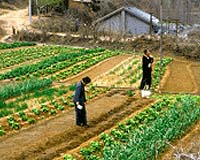 China has said it must urgently step up the development of genetically modified crops as it faces mounting challenges to feed its 1.3 billion people due to shrinking arable land and climate change.

Newly-approved plans aim to cultivate high-yielding and pest-resistant genetically modified species, the State Council, or cabinet, said in a statement posted on its website late Wednesday

At a meeting chaired by Premier Wen Jiabao, Chinese leaders said the plans were “of strategic significance” in the country’s drive to make its agricultural sector more efficient and competitive internationally, the statement said.

“Departments must fully understand the importance and urgency of this significant project, further improve the programme and waste no time to carry it out,” it said.

It gave no details on which crops should be developed, but analysts said the plans were likely to focus on developing genetically modified organisms, or GMOs, including corn and rice.

“The approval signalled China is attaching more importance to development of GMOs and has made it a national strategy,” said Huang Dejun, chief analyst with Beijing Orient Agribusiness Consultant firm.

China’s cabinet last week approved a mid- and long-term grain security plan that aims to keep annual grain output above 500 million tonnes by 2010 and increase production to more than 540 million tonnes a year by 2020.

Wen told a cabinet meeting China faces serious challenges in ensuring it will have enough grain to feed its population in the decades to come, citing urbanisation and climate change as two major problems.

“Given the shortage in resources like arable land and water and increasing population, GMO is vital for the country’s agriculture output,” Huang told AFP.