The Pasadena-based thrift’s failure is the second-biggest by a U.S. bank. Doors will reopen Monday. 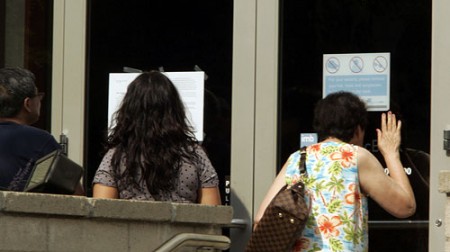 The federal government took control of Pasadena-based IndyMac Bank on Friday in what regulators called the second-largest bank failure in U.S. history.

Citing a massive run on deposits, regulators shut its main branch three hours early, leaving customers stunned and upset. One woman leaned on the locked doors, pleading with an employee inside: “Please, please, I want to take out a portion.” All she could do was read a two-page notice taped to the door.

The bank’s 33 branches will be closed over the weekend, but the Federal Deposit Insurance Corp. will reopen the bank on Monday as IndyMac Federal Bank, said the Office of Thrift Supervision in Washington. Customers will not be able to bank by phone or Internet over the weekend, regulators said, but can continue to use ATMs, debit cards and checks. Normal branch hours, online banking and phone banking services are to resume Monday.

Federal authorities estimated that the takeover of IndyMac, which had $32 billion in assets, would cost the FDIC $4 billion to $8 billion. Regulators said deposits of up to $100,000 were safe and insured by the FDIC. The agency’s insurance fund has assets of about $52 billion.

IndyMac’s failure had been widely expected in recent days. As the bank was shuttering offices and laying off employees to cope with huge losses from defaulted mortgages made at the height of the housing boom, nervous depositors were pulling out $100 million a day. The bank’s stock price had plummeted to less than $1 as analysts predicted the company’s imminent demise.

The takeover of IndyMac came amid rampant speculation that the federal government would also have to take over lenders Fannie Mae and Freddie Mac, which together stand behind almost half of the nation’s mortgage debt.

Shares of the two mortgage giants have nose-dived this week and fell again Friday, helping to drag down the Dow Jones industrial average 128.48 points, or 1.1%, to close at 11,100.54. Investors and analysts are concerned that the two government-chartered companies need to raise billions of dollars to offset expected losses stemming from mortgage defaults, but will be unable to do so in the private market. Officials in Washington spent most of Friday trying to knock down rumors of a government bailout.

IndyMac, which once employed 10,000, fell prey to a classic run on the bank, and regulators singled out Sen. Charles E. Schumer (D-N.Y.) as having helped to fuel massive withdrawals. On June 26, Schumer said in letters to the FDIC, the OTS and two other federal agencies that IndyMac might have “serious problems” with its loan holdings.

“I am concerned that IndyMac’s financial deterioration poses significant risks to both taxpayers and borrowers,” he wrote. The bank “could face a failure if prescriptive measures are not taken quickly.”

That public warning prompted depositors to pull $1.3 billion out of accounts between June 27 and Thursday.

“This institution failed today due to a liquidity crisis,” John M. Reich, director of the OTS, said at a news conference Friday afternoon. “Although this institution was already in distress, the deposit run pushed IndyMac over the edge.”

Schumer said in a statement that the cause of IndyMac’s failure was “poor and loose lending practices” that should have been prevented by more active regulation. Later, a Schumer spokesman said: “Mr. Reich, a political appointee, should be spending less time playing politics and more time doing his job.”

IndyMac is the second-largest financial institution failure in U.S. history, following only Continental Illinois Bank, which had assets of about $40 billion before it was shuttered in 1984. It is the fifth FDIC-insured failure of the year. Reich emphasized that though other financial institutions remained on the agency’s danger list, he believed most of them would be able to work their way back to solvency.

“The IndyMac situation is unique. It does not signal a direction for the industry as a whole,” he said.

IndyMac’s board boasts a number of California luminaries. Among the directors, according to a proxy statement the company filed in March, is Pat Haden, 55, a former star quarterback for USC and the Los Angeles Rams, who has been a partner of Riordan, Lewis & Haden, the investment firm founded by former Los Angeles Mayor Richard Riordan, since 1987.

IndyMac had been operating under close regulatory scrutiny since January, when the OTS determined that the company was in ill health. The bank lost $614.8 million in 2007 and $184.2 million during the first quarter of this year, largely as the result of souring home loans.

IndyMac, which posted $342.9 million in profit in 2006, had been a leader in so-called alt-A mortgages, which were made to borrowers with decent credit who often weren’t required to verify their income to get the loan. That year, the company’s stock price peaked at $50 a share, valuing IndyMac at a tidy $3.5 billion.

However, as the real estate market slowed, the company’s loan losses ballooned. In its March report to regulators, the company said that 8.86% of its loans were delinquent, up from 1.51% the year before. By the end of 2007, the company’s shares were selling for $6. They closed at 28 cents Friday.

IndyMac, which has been selling and closing offices, revamped its business to focus solely on so-called conforming loans, which are relatively small-balance mortgages made to people with good credit and that can be immediately resold on the secondary market. Reich said it was unclear whether the moves would have proved sufficient to save the troubled thrift.

“Would the institution have failed without the deposit run?” he said. “We will never know.”

At 3 p.m. Friday, IndyMac shut the doors to its main branch in Pasadena, three hours early, leaving customers angry and surprised. Georgi Arnold of El Monte had come to deposit $230 into her checking account but wasn’t allowed inside. “I am livid,” said Arnold, 32. “I’m glad I closed my savings account already.”

Arnold said she had “a few thousand dollars” in the bank, money she uses for her children, small bills and vacations. “Best believe first thing come Monday I’ll be drawing out all my money and closing my account because this is ridiculous,” she said.

Jagdish Belgaum rushed to the bank after hearing the news, only to be locked out. The 42-year-old South Pasadena resident said he had about five CD accounts totaling just under $100,000.

“Luckily I don’t need the money right away,” said Belgaum, a chief technology officer at a medical management company. “I’m more afraid of the long line on Monday. That’s why I came running.”

IndyMac announced Monday that it was laying off 3,800 employees. FDIC spokesman David Barr said Friday outside IndyMac headquarters that “the bulk of the employees will be needed to run this as a full-service bank.”

But a handful of employees who were leaving the building appeared to be preparing for the worst, lugging boxes of belongings and saying goodbye to one another. One woman carried out a potted plant. Regulators said they hoped to sell the bank within 90 days.

The FDIC has set up a toll-free phone line — (866) 806-5919 — and a page on its website — www.fdic.gov/bank/individual/failed/IndyMac.html — for bank customers to obtain information.

IndyMac Bank is the main subsidiary of IndyMac Bancorp. It was unclear what would happen to the holding company in light of the seizure.