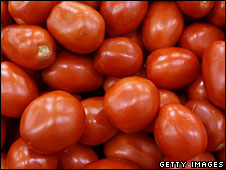 Officials have warned against Roma, round and plum tomatoes from some sources

More than 1,000 people in more than 40 US states are now confirmed to have become ill with salmonella since April, officials say.

The US health authorities suspect the bacteria to be present in some raw tomatoes, chilli peppers and the coriander used in salsa.

The outbreak is deemed to be the worst one of a food-borne illness in the US for more than a decade.

Two people are said to have died, and 200 people have been taken to hospital.

There have also been several cases in Canada.

Investigators say they think there are several sources for the outbreak as many of those ill say they did not eat hot peppers or foods like salsa that contain them, Dr Robert Tauxe, food safety chief at the US Centers for Disease Control and Prevention.

“We are quite sure that neither tomatoes nor jalapenos explain the entire outbreak at this point… We’re presuming that both of them have caused illness,” he told the Associated Press.

“We really are working as hard and as fast as we can to sort out this complicated situation and protect the health of the American people.”

(“Suspect”, “They Think”,“Quite Sure”, “Really Working Hard”, “As Fast As We Can”, that says it all.
They have not the foggiest idea. – The Infinite Unknown)

The US Food and Drug Administration (FDA) has warned against eating raw plum, round or Roma red tomatoes unless they are from certain states or abroad.

Cherry and grape tomatoes and those sold with the vine still attached have not been associated with the outbreak.

Symptoms of salmonella, which usually appear within 12 to 72 hours of eating contaminated food, include diarrhoea, nausea and vomiting, headaches, stomach cramps and fever.

The symptoms of salmonella can last for several days, but most people make a full recovery within a week.

Those most at risk of developing severe illness are the elderly, infants and people with weakened immune systems.